Akshay Kumar’s ‘Bell Bottom’ Becomes the First Film in the World to Start and Finish Shooting amid Coronavirus Pandemic!

Directed by Ranjit M Tewari, Bell Bottom is produced under the banners of Pooja Entertainment and Emmay Entertainment. 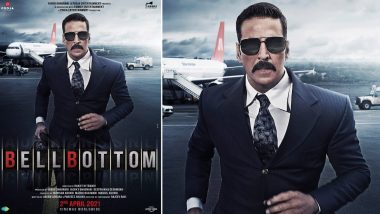 There are several films that had to suffer a delay owing to the coronavirus outbreak. Either the ongoing shootings had to be stalled or the films that were planned to be shot from a particular date had to be postponed. The directors and producers had to wait for the authorities to give a green signal for the shooting of films to be resumed and the travel ban to be lifted, in case the shooting had to happen in abroad. After months of lockdown, the authorities gave a nod for makers to resume or start shooting of films by adhering to guidelines considering the safety of the cast and crew. Bell Bottom: Akshay Kumar and Vaani Kapoor's Film's Glasgow Schedule Wrapped Up, Team Heads To London.

It was during this time of the pandemic when the makers of Akshay Kumar’s upcoming film Bell  Bottom started to shoot and it has also successfully managed to complete it. With that, Bell Bottom becomes the first film in the world to start and finish shooting amid the coronavirus pandemic. The cast and crew flew in a chartered plane to Glasgow, Scotland in August first week. Understanding the humongous budget constraint that would come upon the makers, Akshay Kumar reportedly decided to do a double shift in order to complete the shoot at the earliest. The units have reportedly been shooting simultaneously with team members in double shifts. Bell Bottom: Akshay Kumar’s Suave Look As RAW Agent In The Upcoming Spy Thriller Released By Makers On His Birthday!

Bell Bottom also stars Vaani Kapoor, Lara Dutta and Huma Qureshi. Directed by Ranjit M Tewari, this spy thriller is produced under the banners of Pooja Entertainment and Emmay Entertainment. It is slated to be released on April 2, 2021.

(The above story first appeared on LatestLY on Oct 01, 2020 09:39 AM IST. For more news and updates on politics, world, sports, entertainment and lifestyle, log on to our website latestly.com).