Alia Bhatt Is Legit The New Member of Kapoor Family, Thanks To Her Boyfriend Ranbir-View Pic

After RK introduced his girlfriend to his parents Rishi Kapoor and Neetu Kapoor, now, he is taking her to the outings with his cousins. 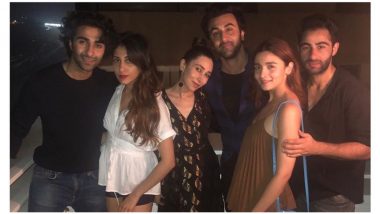 Ranbir Kapoor and Alia Bhatt's relationship is going to the next level, with each passing day. The couple has been quite open about their bonding and made it clear that they are taking it 'slow'. After RK introduced his girlfriend to his parents Rishi Kapoor and Neetu Kapoor, now, he is taking her to the outings with his cousins. Karisma Kapoor, Aadar Jain, Armaan Jain, Anissa Malhotra were seen with the couple. Ranbir Kapoor and Alia Bhatt Get Caught Smiling and Chatting at the Airport, What's Cooking? (View Pics).

The  Dil Toh Pagal Hai actress shared this adorable snap on her Instagram page. The fans were affirmative about the bonding they have and are totally rooting for the couple to get married. Check out the picture below.

Speaking about his family, she had earlier said, "At the moment, it is important for me to recognize people who have influenced me positively. Ranbir is one of those people. Even his family members bring in loads of positivity in me. Also, Ranbir has always been my favourite actor and he still is."

(The above story first appeared on LatestLY on May 25, 2019 09:38 AM IST. For more news and updates on politics, world, sports, entertainment and lifestyle, log on to our website latestly.com).