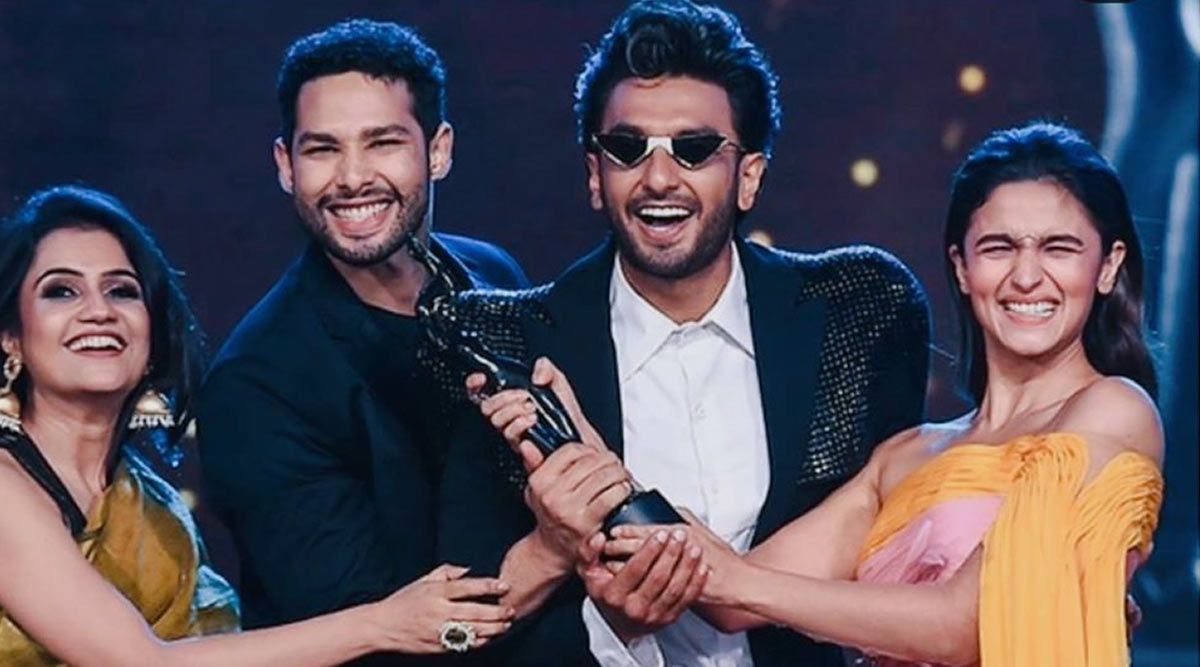 The Filmfare Awards 2020 took place on February 15, 2020 in Assam. It turned out to be a huge night for Zoya Akhtar's Gully Boy which took home as many as 13 awards including the major honours of best actress, best actor, best director, best film and best supporting actor as well as actress. It was raining awards for the film and we can see all the happiness and excitement of the team in an amazing video shared by Alia Bhatt after their win. Alia who bagged the best actress award posted a picture of the Gully Boy winning team on Instagram which had Ranveer Singh, Siddhant Chaturvedi and Amruta Subhash. Filmfare Awards 2020: Fans Unhappy With Gully Boy’s Award Frenzy, Share Funny Memes and Jokes on Twitter (View Tweets).

Alia also shared a video where the Gully Boy team was seen dancing to "Apna Time Ayega" as they posed along with their black lady trophies. The video also featured Vijay Maurya who bagged the best dialogue award for Gully Boy. Gully Boy clocked a year since its release on Friday and with such a historic win, it does call for a massive celebration and looks like the team is all set to party big. Sharing the picture and video, Alia wrote, "A humble bunch! *drops mic walks away*"

Although, the internet seemed to be slightly divided over Gully Boy being showered with all the major honours. Twitterati came up with several memes and jokes relating to the film's major win and in one of them even said that the show should have been called 'Gully Awards'. Filmfare Awards 2020 Inside Pics and Videos: Check Out Akshay Kumar's Dance, Vicky Kaushal-Varun Dhawan's Towel Act and More From The Ceremony!

Not long after this, Kangana Ranaut's sister and manager, Rangoli Chandel too tweeted mocking Alia's win for best actress saying that how did she bag this award despite having a supporting role. The Filmfare Awards 2020 are all set to be telecast on February 16, 2020 on Colors channel.