The first trailer of the upcoming comedy, Badhaai Ho, is a rage on the internet. 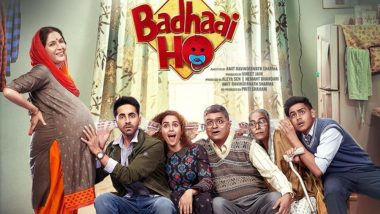 The first trailer of the upcoming comedy, Badhaai Ho, is a rage on the internet. A sensitive subject has been presented in a light hearted manner through the film. The story follows a man in his late 20's, played by Ayushmann Khurrana, who is informed that his mother is pregnant. The bravely funny role of the mother is played by Neena Gupta and hats off to her for picking it. The movie also stars Sanya Malhotra, Surekha Sikri, and Gajraj Rao, who all get their moment to shine in the trailer. But there are two more actors whom you might have missed! Bollywood's cutest couple, Riteish Deshmukh and Genelia D'Souza, also make a blink and miss appearance in the Badhaai Ho trailer.

If you also failed to spot Riteish and Genelia, we don't blame you. You might have been busy laughing while watching the trailer, too occupied to notice the minute details. Well, in the footage, at 00:28, the couple pops up on screen. Okay, they don't have a starring role there. But their picture is there on the box of Pregakem, a pregnancy detection kit they endorse in real life. Thank us later, for this little trivia for you. Badhaai Ho Trailer: Why Ayushmann Khurrana-Sanya Malhotra's Film Will Remind Malayalam Movie Fans of This Classic Mohanlal Film 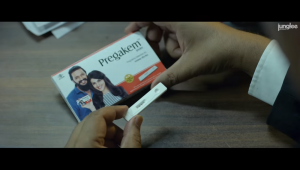 we are surely excited about the movie. It sure is set to break taboos about sex and pregnancy in garb of a light-hearted comedy. Badhaai Ho also looks like the kind of movie that would not become preachy while delivering a message. But well, we can only pass a fair judgement when the movie opens in theaters.

Directed by Amit Ravindernath Sharma, Badhaai Ho, is all set to release on October 19.

(The above story first appeared on LatestLY on Sep 11, 2018 02:55 PM IST. For more news and updates on politics, world, sports, entertainment and lifestyle, log on to our website latestly.com).