Bharat Goel on Recreating Songs: It Is Always a Challenge, When the Old Track Is So Loved

Bharat Goel says recreating an old hit is always a challenge because you not only need to do justice to the production of the song, but also the composition and its creative part. 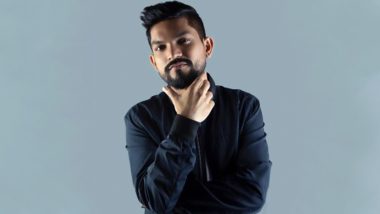 Composer Bharat Goel says recreating an old hit is always a challenge because you not only need to do justice to the production of the song, but also the composition and its creative part. Goel has recreated the old Nadeem-Shravan hit "Ek bewafaa", originally sung by Sonu Nigam in the 2005 Akshay Kumar-Kareena Kapoor film Bewafaa. Pianist, Composer & Acclaimed Recording Artist Keyvan Hardani Turns Attention to Tchaikovsky.

"The recreation of an iconic song is always a challenge, because you not only need to do justice with the production, but also the composition and creative part. It has to seamlessly flow into the melody," Goel said. He added: "You need to live up to the reputation of the original track, especially when the old track is so loved. So, that was a big challenge, but we tried our best and we're quite pleased with what we've managed to achieve." Arijit Singh to Make His Debut as a Music Composer with Sanya Malhotra’s Upcoming Film Pagglait.

The recreated version is sung by debutant singer Sameer Khan and penned by Kaushal Kishore, and features actors Krystle Dsouza, Siddharthh Gupta and Akshay Kharodia in the music video. The song has been arranged, co-produced and programmed by Firoz Khan. The song was composed, produced, written and recorded during lockdown. Goel says managing things over zoom and phone calls was tough. "Since we were all likeminded people, we managed easily. Kaushal Kishore's writing, Sameer's voice and my composition blended well and we managed to overcome that challenge. This is the first time I worked with Sameer, and we recorded in the studio," says Goel.

He added that their version of "Ek bewafaa" is emotional, with a sad and betrayal vibe. "The melody seamlessly flows into the iconic tune that people are already familiar with. That's what makes it stand out," he says. Lyrics are an integral part of a song and Bharat feels Kaushal has done justice to the song's vibe. "Kaushal has done a phenomenal job of writing the track. It's an intense song and he has written very deep and meaningful words," he says.

(The above story first appeared on LatestLY on May 06, 2021 11:31 PM IST. For more news and updates on politics, world, sports, entertainment and lifestyle, log on to our website latestly.com).