Bharat Ki Beti Song From Gunjan Saxena: The Kargil Girl Is A Patriotic and Emotional Tribute To Daughters (Watch Video) 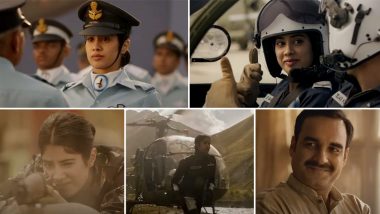 Over the weekend, Netflix released the trailer of their Janhvi Kapoor starrer Gunjan Saxena: The Kargil Girl. The movie sees Janhvi play Gunjan Saxena, the first-ever woman Air Force Pilot (along with Srividya Rajan) to fly into a war zone to rescue her comrades during the Kargil War of 1999. She is also the first woman to have been awarded the Shaurya Chakra. The trailer released on August 1, 2020 and gave us a glimpse of Gunjan's 'never give up attitude' and her father's rock-solid support in her journey to become an Air Force Pilot. Gunjan Saxena: The Kargil Girl Trailer Out Now, Janhvi Kapoor Shines Bright In This Biopic That Will Invoke Patriotism In You (Watch Video).

The movie is all set for release on August 12, three days before Independence Day and is one of the most awaited movies of 2020. Sadly, the movie, just like others fell prey to the COVID-19 pandemic and hence, will be released online. The makers dropped the first song from the movie title "Bharat Ki Beti" and its a hair-raising emotional song that will leave you teary-eyed. Janhvi Kapoor Says 'Hope We Make You Proud Gunjan Mam' After the IAF Officer Shares a Beautiful Post on the Making of Her Biopic.

The song traces how despite Gunjan facing many gender-based failures and hurdles, never gives up on her dream to become a fighter pilot. The song also sees Gunjan's father (Pankaj Tripathi) show his unwavering support for his daughter's dreams and pushing her to never give up. In short, "Bharat Ki Beti" is a memorable Arijit Singh and Amit Trivedi crooned melody that will leave you emotional and patriotic at the same time.

(The above story first appeared on LatestLY on Aug 03, 2020 11:47 AM IST. For more news and updates on politics, world, sports, entertainment and lifestyle, log on to our website latestly.com).