Gunjan Saxena: The Kargil Girl Trailer Out Now, Janhvi Kapoor Shines Bright In This Biopic That Will Invoke Patriotism In You (Watch Video) 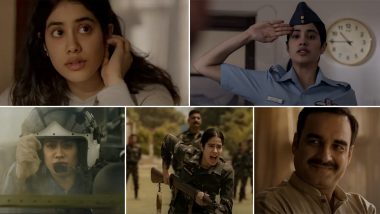 While Janhvi Kapoor has a variety of films under her name, her next release, the biopic of India's first woman Air Force Officer to go to war, Gunjan Saxena, is one of the most awaited ones. After a studious amount of prep and meetings with the war hero, actress Janhvi Kapoor essayed the role of the female pilot who rewrote history and this has been one of the most ambitious projects for the actress, in her own admission. Janhvi, in her latest IG post, revealed that the trailer for her next, Gunjan Saxena: the Kargil Girl, will be releasing on August 1, 2020 at 10 am and it is finally out. Janhvi Kapoor Says 'Hope We Make You Proud Gunjan Mam' After the IAF Officer Shares a Beautiful Post on the Making of Her Biopic.

All set for a mega release, Gunjan Saxena, unfortunately, went the OTT way because of the havoc that the COVID-19 pandemic and subsequent nationwide lockdown caused. Gunjan Saxena will release on Netflix on August 12, 2020, merely 3 days before Independence Day and the trailer has finally been released. Janhvi Kapoor Shares Few BTS Moments from the Sets of Gunjan Saxena: The Kargil Girl (View Pics).

While the first look posters and numerous IG posts of Janhvi Kapoor have already proven the fact that the lady nails her look of an Air Force pilot in the film, the trailer sees Janhvi, as Gunjan, try and succeed in a profession dominated by men. The trailer follows Gunjan and her story where she aims high, with her father's (Pankaj Tripathi) unwavering faith in her, as she beats all odds and exceeds expectations of her superiors and contemporaries as she flies into a war zone. Janhvi Kapoor's First Look From Kargil Girl as IAF Pilot, Gunjan Saxena Will Be Out on August 29, 2019.

In short, Janhvi Kapoor as Gunjan Saxena impresses in the trailer and manages to awaken the inner patriot in you. Gunjan Saxena: The Kargil Girl also stars Angad Bedi, Pankaj Tripathi, Vineet Singh and Manav Vij in supporting roles. Produced by Dharma Productions in association with Zee Studios, this inspirational story will premiere on August 12, 2020 on Netflix.

(The above story first appeared on LatestLY on Aug 01, 2020 10:23 AM IST. For more news and updates on politics, world, sports, entertainment and lifestyle, log on to our website latestly.com).