Ever since we saw the posters of the film, it was clear that Janhvi looked like an amazing choice for this role. The film also stars Pankaj Tripathi and Angad Bedi in key roles. 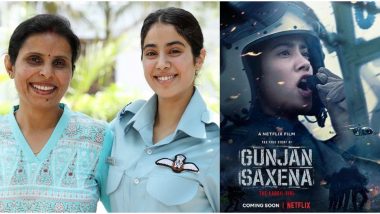 Janhvi Kapoor who debuted with Dhadak in 2018 is now waiting for her second film to release although it has now taken a different turn as Gunjan Saxena: The Kargil Girl will now release on Netflix instead of theatres. The film directed by Sharan Sharma is a biopic on the life of Indian Air Force pilot Gunjan Saxena who, along with Srividya Rajan, became the first Indian women fighter pilots to venture into a war zone. Ever since we saw the posters of the film, it was clear that Janhvi looked like an amazing choice for this role. The film also stars Pankaj Tripathi and Angad Bedi in key roles. CONFIRMED! Janhvi Kapoor Starrer Gunjan Saxena: The Kargil Girl To Premiere On Netflix (Watch Video).

Recently, Gunjan Saxena herself took to Instagram to share an amazing post calling her journey of watching her biopic being made an amazing experience. She wrote, "What a journey it has been with Sharan. I have always admired his honesty, sincerity and a sensitive compassion while portraying my life on big screen. Everybody at my age has a story to tell. Lucky few like me have Sharan and Janhvi to narrate my story. None of life journeys are a walk in park and mine was no different. But at times a one-track mind on goal does help."

Janhvi soon reshared the post and thanked Gunjan Saxena for her kind words. Responding to her post about the upcoming film, the actress wrote, "It’s an honour to know you let alone have the privilege to be able to understand your journey and share it with the world Hope we make you proud Gunjan Mam."Janhvi Kapoor's Gunjan Saxena: The Kargil Girl to Hit Netflix on August 15, 2020?

While the film's release date on Netflix is yet to be announced, we bet fans are more than excited for this biggie to hit the digital medium. Given the COVID-19 situation, another film that is up for a direct OTT release is Amitabh Bachchan and Ayushmann Khurrana starrer, Gulabo Sitabo.

(The above story first appeared on LatestLY on Jun 10, 2020 06:22 PM IST. For more news and updates on politics, world, sports, entertainment and lifestyle, log on to our website latestly.com).