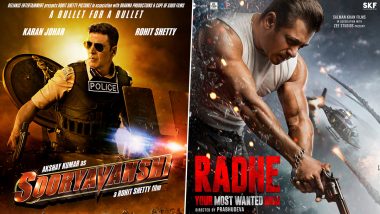 It was back in March 2020, when India went into a lockdown. All sorts of business were affected due to the restrictions imposed by the government. The entertainment industry was badly hit by this shutdown and many people lost their jobs while others incurred huge losses. Many filmmakers had to postpone their films while distributors, exhibitors and theatre owners were upset about other filmmakers opting for OTT routes. Radhe, Sooryavanshi or '83 May Not Release Immediately After The Lockdown is Lifted - Here's Why.

This has created a bad situation for people in the entertainment industry once again. Nitin Datar, President of Cinema Owners And Exhibitors Association Of India (COEAI) spoke to Pinkvilla about the same and expressed his concern about the shutting down of theatres. He said that many owner will go into great losses and will have to even shut their business because of the lockdown. He added that not just two films like Akshay Kumar's Sooryavanshi or Salman Khan's Radhe: Your Most Wanted Bhai will help revive business, when the theatres opened once again.

“We have informed the Maharashtra state government that the exhibitors are willing to offer their theatres as quarantine centres if they are in shortage of beds. We have electricity, fans and safety measures in place. We are yet to hear back from them on it. We have also asked the government to let us use our premises for any other legal purposes, as the theatres have anyway been shut since the past one year," he stated. Radhe: Your Most Wanted Bhai: Teaser of Salman Khan’s Film to Release with Akshay Kumar’s Sooryavanshi?

He went to say, "In fact, some of our exhibitors hadn’t opened their cinemas earlier too when the government had allowed, as by then most films had taken the OTT route. I think by the time all the permissions are given, 25 to 30 per cent of theatres all over Indian will stop functioning because of the losses they have suffered until now."

The president concluded by saying, “One Sooryavanshi or Radhe will not help the theatres to revive, we need others also to release their films. But till the time the occupancy is not increased to 100 per cent, I don’t think any producer will be willing to make a theatrical release. Since the last few months, many exhibitors are trying their best to run the business, even if it's not making money. But at present the situation is grave, and we don’t know what the future holds in store for us.” Sooryavanshi was supposed to release April 30 but has been postponed to a later date. Salman Khan's Radhe also is scheduled to release in May but is likely to get postponed as well.

(The above story first appeared on LatestLY on Apr 14, 2021 08:02 PM IST. For more news and updates on politics, world, sports, entertainment and lifestyle, log on to our website latestly.com).