Drishyam 2: Ajay Devgn and Tabu To Once Again Team Up for the Hindi Version of the Thriller – Reports

Reportedly, Ajay Devgn and Tabu are part of Drishyam 2. If all things go well, then the two actors will be seen in a single frame once again. For the unaware, Ajay and Tabu were a part of the Drishyam along with Shriya Saran. Read on. 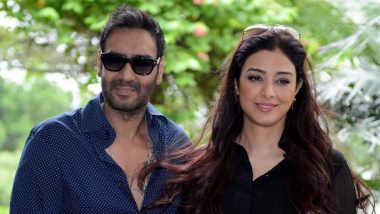 On February 19, 2021, Malayalam thriller Drishyam 2 starring Mohanlal was released online and a Telugu version of the film has already been announced. Well, now, here's some news for the Bollywood peeps, as the latest we hear is that the Hindi version of Drishyam 2 will see Ajay Devgn and Tabu. As per a report in the Times of India, if all things go well, then the two actors will be seen in a single frame once again. For the unaware, Ajay and Tabu were a part of the Drishyam along with Shriya Saran. Drishyam 2 Movie Review: Mohanlal’s Sequel to His Blockbuster Family Thriller Is Loaded With Pulpy Surprises (LatestLY Exclusive).

"Ajay and Tabu have agreed in principle to play the leads. The balance cast however is yet to be decided. The paperwork of buying the rights from the original's producer is almost done, " a source told the portal. The report further mentions that shooting locales and budget, are fast being worked out.

Reportedly, Drishyam 2 Hindi will be made along the lines of the Malayalam flick but will have a few modifications. It's also said that the second part of the film will go on floors in the third quarter of 2021, as the makers are looking for a 2022 release. Drishyam 2 Review: ‘A Decent Follow-up’ or ‘Disappointingly Tepid’, Mohanlal’s Film Gets Mixed Reviews From Critics.

Drishyam Hindi which released in 2015 was a huge hit and fans have been eagerly waiting for an update. Talking about the Malayalam Drishyam 2, it's garnering mixed reviews and is currently steaming on Amazon Prime Video. Stay tuned!

(The above story first appeared on LatestLY on Feb 25, 2021 10:51 AM IST. For more news and updates on politics, world, sports, entertainment and lifestyle, log on to our website latestly.com).