Emraan Hashmi Turns Into Hollywood 'Heroes' In This Fan-Made Video And His Favourite Is Johnny Sins!

Actor Emraan Hashmi shared one edited video where he is seen 'acting in Hollywood films.' 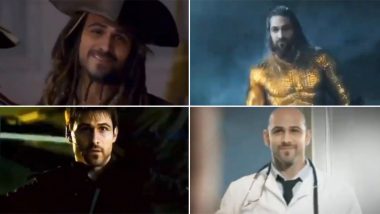 Internet can really get funny at times with the abundance of memes and hilarious videos. Bollywood celebs often share the videos or fan art that they receive in their DMs on daily basis. Actor Emraan Hashmi also shared one edited video where he is seen 'acting in Hollywood films.' The video also has him as 'Johnny Sins,' which probably was Emraan's favourite part! John Abraham-Emraan Hashmi's Mumbai Saga To Go On Floors Next Month in Hyderabad's Ramoji Film City.

Quite multi faceted must say . Don’t miss mr. sins in the end pic.twitter.com/oa49HsNr9M

On the work front, Emraan will be next seen in Sanjay Gupta's gangster drama, Mumbai Saga. The look posters of the same were revealed by the makers and fans are extremely excited for the same. Coming back to the video above, what are your thoughts?

(The above story first appeared on LatestLY on Aug 07, 2020 04:29 PM IST. For more news and updates on politics, world, sports, entertainment and lifestyle, log on to our website latestly.com).