Feroz Khan Birth Anniversary: Did You Know His Dharmatma Was The First Hindi Film To Be Shot In Afghanistan? (Watch Video)

Feroz Khan was a unique man with unique tastes and we are glad thanks to him, Bollywood could start shoot a film in Afghanistan. The movie was Dharmatma which was considered the Godfather of India. Watch this video of how they were welcomed. 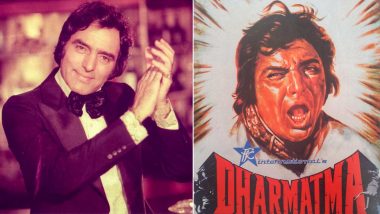 Afghanistan is going through a humanitarian crisis due to the Taliban takeover. Every other day, we come across stories of brutality and compromised freedom of men and women. But it wasn't as brutal as it is today. Several of our filmmakers have captured the essence of the land in their movies and Feroz Khan was one of them. He was the first filmmaker to shoot a film in Afghanistan. The film was titled Dharmatma which is dubbed as India's Godfather. The film also starred Hema Malini in a crucial role. Shakti Kapoor Bagged the Role of a Baddie in 1980 Hit Qurbani Thanks to Feroz Khan’s Mercedes – Here’s How

A page on Twitter shared a video of the cast of Hema Malini and her mother, Danny Denzongpa, Feroz Khan and others arriving at the Kabul airport. They received a warm welcome and was almost mobbed. There's an interesting story behind it. Check it out here... Feroz Khan Death Anniversary: Did You Know This Legendary Actor Was Part of a Hollywood Film?

The cast of Dharmatma being received by Afghan dignitaries in #Kabul in 1974.

Speaking to a daily, Hema Malini reminisced about the time saying, "The Kabul I knew was so beautiful and my experience there was very nice. We had landed at Kabul Airport, which was at the time as small as the Mumbai airport, and we stayed at a hotel nearby. But eventually, we travelled to locations like Bamiyan and Band-e-Amir for our shooting and while returning back we would see these men with these long kurtas and beards, who looked like Talibanis. At that time Russians were also a force in the Afghanistan."

Feroz Khan was a unique man with unique tastes and we are glad thanks to him, Bollywood could start shoot a film in Afghanistan.

(The above story first appeared on LatestLY on Sep 25, 2021 08:10 AM IST. For more news and updates on politics, world, sports, entertainment and lifestyle, log on to our website latestly.com).