Gali Guleiyan is not everyone's cup of tea, thanks to its slow-moving narrative and dark themes. 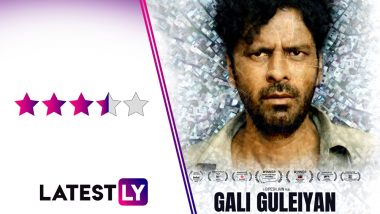 Manoj Bajpayee, who was last seen playing John Abraham's righteous-minded cop brother in Satyameva Jayate, has recently won the Best Actor Award at IFFM 2018 for his performance in Gali Guleiyan, directed by debutante Dipesh Jain. This caught my notice since he had beaten some very conventional and popular choices like Ranbir Kapoor in Sanju and Varun Dhawan in October. Now that I have witnessed the incredible performance of this chameleonic actor, there is hardly any doubt why the award came in his way.

Khuddoos (Manoj Bajpayee) is a recluse living in Old Delhi who spies on his neighbours through CCTV cameras that he has set around his house. He hardly leaves his house and neglects his electronics shop, much to the chagrin of his sole caring friend Ganeshi (Ranbir Shourey). On a parallel track, we meet Idris (Om Singh) a young boy living in the same colony who is doted on by his pregnant mother (Shahana Goswami) but is abused by his butcher father (Neeraj Kabi).

While searching the house for his mother's necklace, Khuddoos overhears Idris being beaten by his father. That moment onwards, he begins this obsession of saving the boy from the abuse, even though Khuddoos has never caught this boy and his family on his cameras before.

If you see a crime happening in front of you and yet you do nothing to help the victim, how complicit in the crime are you? At the onset of Gali Guleiyan (released internationally as In The Shadows), the movie asks you this question through a quote from William S Burroughs. As the movie progresses, you find out that perhaps by doing nothing, the biggest victim of your actions is yourself.

Gali Guleiyan is a slow burn of a movie that doesn't rush into things, as many of our films. There were several scenes that have minimal or no dialogue at all. Gali Guleiyan doesn't spell everything out for you, except in the climax. It avoids briefing you anything about why Khuddoos is the way he is, and his particular obsession with saving this one boy. Instead, it lets you discover the reasons through the narrative, paralleling both the tracks and make you connect the dots. And that's where the fun lies in exploring a movie like Gali Guleiyan. Okay, fun, maybe not the right word to explain a dark drama like this.

The mystery may be Gali Guleiyan's weakest part. The twist was easily obvious within some twenty minutes into the film. I don't know if the director was deliberate about leaving the hints for you to take in or he wants to main the mystery till the end. I hope that it is the former case. That said, some parts of the narrative are deliberately contrived to work towards the twist, and the climax tries to spell it out, instead of assuming that we can figure it out ourselves. Or have already done it aeons ago.

Another little niggle I have with the film is that there are too many influences from other specimens of cinema. There are shades of Francis Ford Coppola's The Conversation and Florian Henckel von Donnersmarck's The Lives of Others. I could even add Ron Howard's A Beautiful Mind and even Terry Gilliam's 12 Monkeys. The climax, that plays with metaphors, feels very similar to the ending of Aparna Sen's 15 Park Avenue. There is also a little too much familiarity in Idris' subplot, as we have seen similar stories in other films (Can I go commercial and say Secret Superstar here?). Then perhaps, considering how his story works into the message of the film, maybe we can ignore the similitude.

I can say this, though, that once we guess the twist and ignore the influences, it became easier for me to relish the proceedings and explore the psyche of the protagonist. Gali Guleiyan is best when it mirrors Khuddoos spiralling down into obsessive lunacy and Idris' finding a way out to escape the darkness of his life. This is a very commendable debut for the young film-maker Dipesh Jain, as he delves into the effects of childhood abuse, and the depiction of mental trauma in the movie has to be commended. The conclusion is brilliantly low-key and liberating in a sense.

Special credit must also be given to the cinematography (Kai Miedendorp) and editing (Chris Witt) for creating a dark, never-ending maze out of the real alleys of Old Delhi. As the protagonist searches his way through the lanes to discover his unfathomable goal, we actually feel the sense of claustrophobia that Khuddoos feels. The background score by Dana Niu is minimal but effective.

Manoj Bajpayee is Par Excellence in Gali Guleiyan, no two words about this! He has sunk himself so deep into the character that it is difficult to distinguish between the actor and the character. From the mannerisms, diction, little tics in his body language and even the physique, Manoj gets everything right on point. It may be a very cliched line to describe, but this definitely one of his better performances. If you have any doubt, just watch Manoj in the scene where he is being heckled out of a restaurant.

The young Om Singh is very natural; he can easily give his senior co-star a run for his money. Shahana Goswami exudes warmth in the proceedings and is terrific as always. After breaking out as a benign saint in Ship of Theseus, Neeraj Kabi looks to have ditched playing the Mr Nice Guy, and has excelled himself in a-hole roles. Oscillating from being abusive to paternal, Kabi brings a lot of nuance in what felt like a very two-dimensional role. Ranvir Shorey as the protagonist's do-gooder friend is very effective.

- The dissection of the protagonist's trauma

- The slow burn narrative isn't for everyone

- The twist is predictable (if that wasn't the intention)

- Some contrivances in the narrative to support the above

- The other movie influences

Gali Guleiyan is not everyone's cup of tea, thanks to its slow-moving narrative and dark themes. However, for fans of niche cinema, the movie is recommended for Manoj Bajpayee and Om Singh's excellent performances and its exploration of childhood abuse and mental trauma.

(The above story first appeared on LatestLY on Sep 03, 2018 11:54 PM IST. For more news and updates on politics, world, sports, entertainment and lifestyle, log on to our website latestly.com).