Gauri Shinde Birthday Special: Five Moments From Her Movies That Are Cinematic Gems 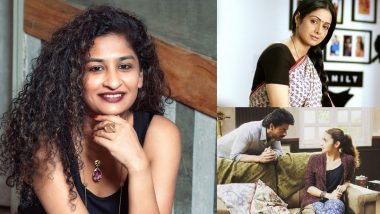 Gauri Shinde has directed just two movies English Vinglish and Dear Zindagi. But gave us so many moments to cherish. Would you believe us if we say she didn't want to make a second film after English Vinglish? She told Film Companion, "A lot of pressure was put on me after the film became a hit. People thought I could be a fluke. I didn’t know if I wanted to be a filmmaker for life. Filming is a laborious process, it takes so much out of you. So unless you have something that you’re dying to tell the world there is no need to add to the burden." We are so glad that she caved under pressure and made Dear Zindagi. No offense meant! Alia Bhatt and Director Gauri Shinde’s Happy Pics Will Make You Root For Dear Zindagi Sequel

On her birthday today, let us tell you about five moments from her two movies that will always remain with us.

Sridevi gets angry in English Vinglish

This scene is one of our favourites in the film. Two people who don't understand each other's language hear their pain out. Sometimes your hurt is your language and that's universal. Sridevi's outburst was so relatable. There are so many kids who don't talk to their parents properly.

Being a homemaker is a thankless job. But Shashi had her own laddo business to for which she didn't get much acknowledgment either. But this scene where her English teacher teaches her the word entrepreneur, she for the first time feels appreciated. Sridevi brings out that sweet feeling of joy so well.

'Shashi is born to make laddoos,' an entitled man's terrible taunt about her gets her all riled up but she keeps it all in. That's a scene that plays out in all our homes, we are just not mindful about them. Shinde keeps it subtle yet so impactful.

It's all about picking a chair - Dear Zindagi

Many boyfriends mean you are a slut, right? But when Shah Rukh Khan explains to you it's like picking a chair which you don't buy without checking out many pieces, we understand. Lifehack right there!

Alia reveals to her parents that she is in therapy now. The point where she says that if people are going to call her mad behind her back, it's better to say it to her face. Don't we all know people who immediately term others with mental illness 'Pagal'? This outburst mirrors a girl's cry for help, a girl's rant about being taken seriously and a society's complete irresponsibility. What a winner!

These moments make us believe that if Gauri Shinde's talent can ooze out in such scenes, what good she can to do to the cinema world. Hope to watch more movies from her.

(The above story first appeared on LatestLY on Jul 06, 2020 09:10 AM IST. For more news and updates on politics, world, sports, entertainment and lifestyle, log on to our website latestly.com).