Have Arjun Rampal and Gabriella Demetriades Decided the Name of Their Baby Boy?

It was on April 23 when Arjun Rampal and Gabriella Demetriades announced on social media platforms that they’re expecting their first child. The couple was blessed with a baby boy yesterday and since then congratulatory messages have been pouring in for the lovely family. 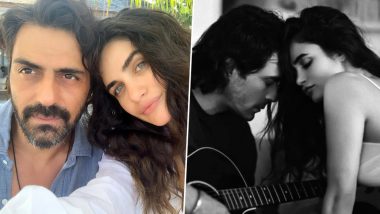 Arjun Rampal and his girlfriend Gabriella Demetriades were blessed with a baby boy yesterday (July 18). Gabriella’s delivery took place at the Hinduja Hospital in Khar, Mumbai. From Arjun’s daughters Mahikaa and Myra to Gabriella’s parents, the couple’s near and dear ones were present at the hospital. It was a day before the delivery the family members were spotted outside the hospital. Congratulatory messages have been pouring in for the newly blessed parents since yesterday. The next things that fans of this duo are curious to know is the name of the baby boy. Arjun Rampal Is One Happy Father Today and His Pictures With Daughters Mahikaa and Myra Are Solid Proof!

Some couple decide the name of the child much before its birth whilst some prefer to decide the name later. So what is in case of Arjun Rampal and girlfriend Gabriella Demetriades? Have they decided the name of their newborn? The speculations were rife that the couple has three names in their mind but haven’t finalised any yet. When Mid-Day.com asked the couple if they have decided any name for their little munchkin, Gabriella responded over a message stating, “Not yet. Still thinking”. Exclusive! Arjun Rampal and Girlfriend Gabriella Demetriades Blessed with a Healthy Baby Boy.

A post shared by Gabriella Demetriades (@gabriellademetriades) on Feb 12, 2019 at 3:52am PST

In an interview Arjun Rampal had revealed how he and Gabriella Demetriades met each other. He was quoted saying, “We met through common friends. So, what can I say? That she stalked me? Wishful thinking that, buddy! It's only been a year since we started dating and here we are.” It was on April 23 when Arjun and Gabriella announced on social media platforms that they’re expecting their first child. This came as a huge surprise not just to fans but also to close pals and family members of the duo. We once again wish Arjun-Gabriella hearty congratulations!

(The above story first appeared on LatestLY on Jul 19, 2019 08:55 AM IST. For more news and updates on politics, world, sports, entertainment and lifestyle, log on to our website latestly.com).