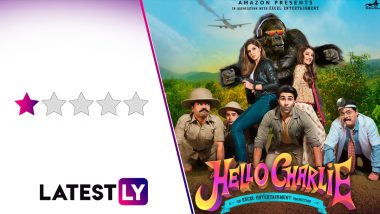 Hello Charlie Movie Review: Remember Aadar Jain? Armaan Jain's younger brother, and Karishma, Kareena and Ranbir Kapoor's cousin, had earlier tried his stint at acting with YRF's Qaidi Band. It was a surprisingly not-so-bad movie let down by a lame climax, where Aadar himself was another weak point. Now another big banner - Excel Entertainment - has decided to try their luck on Aadar's starry dreams, and what we get is Hello Charlie, a movie that is far more terrible than his first film. This one is straightaway bananas! Hello Charlie Star Aadar Jain Says Jackie Shroff Is the Coolest Person He Has Ever Met.

Aadar plays the titular Charlie, a youngster who comes to try his luck in Mumbai. Hope this one line is enough to show how dated the plotline is. Anyway, he stays with his irked uncle (Darshan Jariwala) and tries his hands at various jobs. His dimwitted and lackadaisical nature means that he would beat Suppandi when it comes to losing jobs on the go.

Meanwhile MD Makhwana (Jackie Shroff), a fugitive billionaire, is trying to flee the country but is caught by the police. Thanks to Charlie's foolishness, Makhwana  manages to escape from the cops' clutches and seeks the help of his squeeze, Mona (Elnaaz Norouzi) to help him escape. Mona suggests to him to go to Diu, dressed as a circus gorilla, and she hires Charlie, who is tasked by his uncle to take care of his truck, to drive the 'gorilla' there. The rest of the film is about this road trip that these two take, where they encounter some humourless situations and irksome characters, which includes a real runaway gorilla!

Look, if a man prancing around in an animal suit is your kind of amusement, then Hello Charlie might have some weak chuckles in offer for you. For the rest of us humourless wankers, Hello Charlie is a terrible excuse of a comedy that couldn't spare one decent laugh. As much as I tried, I really couldn't figure out one scene that felt mildly amusing at best. Apart from the bewilderment of seeing a veteran actor like Jackie jump around in a fake gorilla suit. And I thought I could never see Jackie in another embarrassing film after Sarkar 3!

The director, who is also the writer, try to infuse many gags in the narrative, but none of them could raise any kind of mirth. Some talented actors like the terrific Girish Kulkarni and Bharat Ganeshpure are reduced to irritating buffoonery. Everything leads to a climax that feels like a rip-off of Andaz Apna Apna finale. Why, there is even a scene of Rajpal Yadav hanging mid-air trying to get hold of a rope that is exactly the same thing which Salman Khan does in the comedy classic!

I just couldn't figure out for whom this movie wants to cater to. If it was for the adults, then I assume the makers think we have been having a poor sense of humour since 2014. Not their fault, I guess. If it was for the kids, then I expect the parents recoiling in embarrassment when Mona is introduced in a swimwear and the other leading lady, played by debutant Shlokka Pandit, is introduced in an midriff-baring item song. Maybe it is the scene where Jackie farts in his gorilla suit and gets trapped in that smelly air that could leave the kids delighted, I think. Hello Charlie Actor Aadar Jain: I Want the Kids and Children To Be Entertained Through This Film.

Even technically, Hello Charlie is a mess. At one point, near the climax, I could clearly see the green-screen that was used to add greenery. Seriously, Excel, how did this pass through your 'ISO' standards?

The performances are also of no saving graces either. Aadar Jain borrows Ranbir's mannerisms but none of the histrionics. At least, Aadar can take solace in the fact that he has done one movie more than his elder brother. Elnaaz and Shlokka are there to be easy on the eyes. Jackie Shroff is... well, I wish he just do webseries, where he gets better roles. Here, he is just bad!

Hello Charlie is streaming on Amazon Prime Video, where Joji is also streaming. I hope you get the hint. Otherwise, if your idea for some laughs is to see a fake gorilla getting shot in the bum a few times, then go for it, while I pray that you get a better sense of humour.

(The above story first appeared on LatestLY on Apr 09, 2021 10:48 PM IST. For more news and updates on politics, world, sports, entertainment and lifestyle, log on to our website latestly.com).