Independence Day 2020: Shah Rukh Khan's I-Day Message is all About Explaining the Meaning of Our Tricolour and his Promise to Honour it Forever 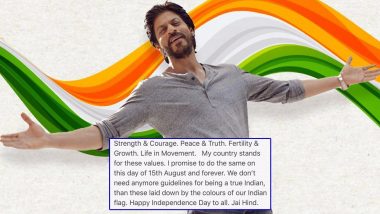 Firstly, a very Happy Independence Day to y'all. The country today celebrates 74 years of freedom since the end of the British era and it's an occasion to celebrate the patriot within all of us. While celebs like Akshay Kumar and Karan Johar have already sent in their wishes, Shah Rukh Khan did the honours by tweeting a rather meaningful thought on this special occasion. SRK took to his Twitter account to share his Independence Day wishes while also explaining the meaning of our tricolour. Independence Day 2020: Vicky Kaushal Playing Ae Watan, Watan Mere From Raazi On A Veena Makes You Wish It Never Ends (Watch Video).

"Strength & Courage. Peace & Truth. Fertility & Growth. Life in Movement. My country stands for these values. I promise to do the same on this day of 15th August and forever. We don’t need anymore guidelines for being a true Indian, than these laid down by the colours of our Indian flag. Happy Independence Day to all. Jai Hind," he captioned while sharing a picture in his famous 'arms stretched' pose. It was a rather beautiful explanation and his promise to honour it forever was even more beautiful. Independence Day 2020 Wishes: Akshay Kumar, Shraddha Kapoor, Vicky Kaushal and Other Bollywood Celebs Share Messages of Gratitude and Brotherhood.

India's Independence Day celebration was a restricted affair this year. It was more about putting everyone's safety over anything else. Unlike every year, 2020 had no movies releasing on I-day. The slot, otherwise, if flooded with different releases. This year, Ajay Devgn's Bhuj: The Pride of India and John Abraham's Attack were slated to release under the normal scenario. However, the ongoing pandemic certainly ruined all our plans.

(The above story first appeared on LatestLY on Aug 15, 2020 08:11 PM IST. For more news and updates on politics, world, sports, entertainment and lifestyle, log on to our website latestly.com).