For the uninitiated, Jacqueline has been roped in for her first ever Netflix outing, a film called Mrs Serial Killer. But before that, the Srilankan beauty is in her hometown spending some quality time with her friends and family for her birthday vacation. 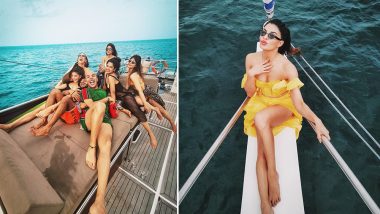 Jacqueline Fernandez is on a spree of posting sexy pictures of herself from her birthday vacation. This time, the Kick actress decided to take a Sri Lankan vacation, which is basically her hometown. With her, were her family and friends who made sure that her day became special. As we can see, it was indeed super-special. The gorgeous actress shared the pictures on Instagram and they are worth multiple heart emojis! Jacqueline Fernandez Birthday Special: Social Initiatives by the Bollywood Beauty That Shows She Has a Heart Of Gold!.

In the recent bunch of snaps, she has donned a beautiful and bright yellow tulle gown. The sunny pictures in this outfit are simply stunning. She posed on a yacht along with her fam and one can simply not miss these moments if they love Jac truly. Check em' out!

Look Who's Looking the Hottest- Jacqueline!

In Need of Some Vitamin Sea

On the other hand, the actress just got a cute birthday wish from none other than the team of Netflix series 13 Reasons Why. The cast of this popular series welcomed her to the Netflix family on her D-day. For the uninitiated, Jacqueline has been roped in for her first ever Netflix outing, a film called Mrs Serial Killer. Isn't that cool? Other than this film, she will also be seen in Sushant Singh Rajput starrer Drive which is yet to announce the release date. The fans are also excited to know whether she will be a part of Salman Khan's Kick 2. Coming back to these pretty pictures, are you envious?

(The above story first appeared on LatestLY on Aug 12, 2019 08:25 PM IST. For more news and updates on politics, world, sports, entertainment and lifestyle, log on to our website latestly.com).