Jacqueline Fernandez Birthday Special: Social Initiatives by the Bollywood Beauty That Shows She Has a Heart Of Gold!

We all know Jaq as an actress, her heart of gold is lesser known to the fans. We wish that the always bubbly actress keeps up with her good work and inspires people always! On her birthday, check out some of the social initiatives taken by the actress. 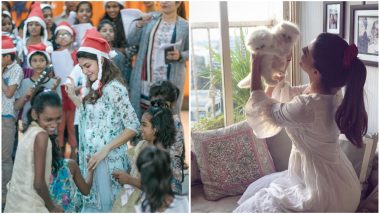 Jacqueline Fernandez turns a year older. The gorgeous actress has been one of the most sought after actresses right now. The Srilankan beauty became one favourite name for the Bollywood filmmakers to cast in the new films. Her dance skills and acting talent is known to everyone. But how many of them know that she is a kind hearted soul who loves to take initiatives to make world a better place. She has taken a pride in starting and sharing some meaningful social initiatives over the years and Instagram is a solid proof. Here are some of the recent ones that she took that will melt your heart. Jacqueline Fernandez's Sexy Pics in a Blue Monokini From Her Birthday Vacation are Goals!.

Animal Cruelty- The actress has been often vocal about her immense concern for the animals and their welfare. The recent one that she voiced for was a Worli-based dog named Lucky, who was beaten to death by a local. The actress demanded justice against this cruel act and animal cruelty in general.

Unite For Sri Lanka- Jacqueline held this initiative and appealed to her Instagram community through a video. This was after the bombings witnessed in the country on Easter. 'God give strength to all the affected families of the Sri Lanka bombings on such an auspicious day.. May Good always overcome Evil, may Love always reign supreme.. completely heartbroken by this and what is happening to this World of ours,' she wrote.

Habitat India- The actress showed her utmost contribution to help those who were affected by heavy floods in Kerala. She got associated with the organisation and also spent time with the people there to help build what was damaged. She also thanked everyone for the donations made.

Dishoom to Cancer- She helped those kids suffering from cancer and helped collect donations for these childern with the #dishoomtocancer initiative. She got in touch with an NGO for the same and appealed to her fans to support the cause.

These are just four of her recent social initiatives that are there documented on the social media. We all know Jaq as an actress, but her heart of gold is lesser known to the fans. We wish that the always bubbly actress keeps up with her good work and inspires people like always! Happy Birthday, girl!

(The above story first appeared on LatestLY on Aug 11, 2019 12:16 AM IST. For more news and updates on politics, world, sports, entertainment and lifestyle, log on to our website latestly.com).