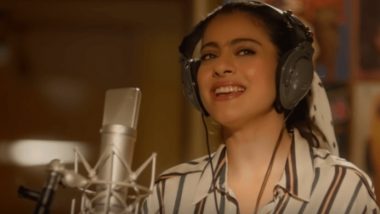 We are super excited for the upcoming Pradeep Sakar movie, Helicopter Eela, which features Kajol in the quirky titular role. The trailer of the film has managed to strike a chord with the audience. Kajol plays the mother of a teenage boy who joins his college to complete her education. It is so great to see the Hindi film industry have mothers, as characters, take up the centre stage and not be reduced to a prop to drive the plot. But seems like the makers have given in to one of the temptations that Bollywood is infamous for. A remake song. Yes, just like every second movie these days, Helicopter Eela will, too, have a rehashed '90s melody. Kajol’s Helicopter Eela Will NOT Release on September 7 – Read Details.

Well, to get you excited, we should tell you that the remade melody is of Kajol's hubby Ajay Devgn's song, called Ruk Ruk Ruk. I loved this number when I was a kid, so I am on board to hear it being remade. As long as Raghav Sachar - the man behind the remake - doesn't ruin it. It will be fun to see Kajol groove to Ruk Ruk Ruk, which originally featured Tabu chasing Ajay. Last year, we saw Ajay recreate one of his and Kajol's song Neend Churayi Meri for Golmaal Again. Yaadon Ki Almari: 2nd Song from 'Helicopter Eela' is About Kajol's Nostalgia.

For Ruk Ruk Ruk remake, while Raghav has recomposed, Anu Malik's original melody, Palomi Ghosh has replaced original singer Alisha Chinai. Raghav told The Times of India, "I've retained the melody just like it was in the original by Anu Malik. We have updated the song with new rap portions that make it more conversational. Since Eela's character is very expressive, it adds a personal touch to the song,".

Raghav also added that he composed the song within a day. He said that Pradeep Sarkar called him one morning and asked to give him the recreated song by afternoon. Raghav concluded, "I rushed to the studio and worked up the basic tune with the rap portions by three in the afternoon. By evening, Pradeep da was also in the studio. When he first heard the song, he just got up and started dancing.”

(The above story first appeared on LatestLY on Sep 20, 2018 07:00 PM IST. For more news and updates on politics, world, sports, entertainment and lifestyle, log on to our website latestly.com).