Kalank is tainted with a cluttered, over-stretched screenplay and a melodramatic treatment. 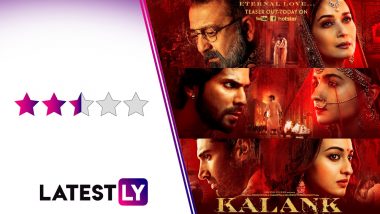 The first time that Roop (Alia Bhatt) and Zafar (Varun Dhawan) set eyes on each other in Kalank, there are flaming arrows being sent across in the background striking a burning Ravana effigy. As if Cupid is cleansing the bitterness of their hearts with his arrows and making room for love. It is a beautifully structured scene, one of the many in the movie. If only director Abhishek Varman and his co-writer Shibani Bathija removed the clutter from the screenplay and made it also better structured, then Kalank would have been a love story worth remembering. Instead, all it offers are some lovely visuals, good performances and occasionally terrific moments.

In 1944, Roop is married off to Dev (Aditya Roy Kapur), a UK-returned newspaper owner and brought to Husnabad, near Lahore (now in Pakistan). That wedding has been conducted at the behest of Satya (Sonakshi Sinha), Dev's first wife under unusual circumstances, though Dev maintains that the marriage won't have any love. Dev is also not on great terms with his father, Balraj (Sanjay Dutt). Kalank Box Office Collection: Varun Dhawan and Alia Bhatt Starrer Off to a Good Start, Witnesses 40% Occupancy.

In Husnapur, Roop hears the beautiful voice of Bahar Begum (Madhuri Dixit Nene), a tawaif from Hira Mandi, a marketplace near Husnabad. Insisting that she learn music from Bahar, Roop convinces her new family to allow her to do so. There, she meets Zafar, a Muslim orphan, and her life takes a drastic turn that doesn't spell good for any of the people around her.

Kalank, as the name suggests, is a tainted love story, involving a married woman who finds love outside her matrimonial arrangement, when she couldn't find in her home. It is a bold theme that has been tackled with an even bolder approach in many movies in Bollywood itself. Why, even Kalank's producer Karan Johar had made a similar attempt in a far gutsier way in his underrated Kabhi Alvida Naa Kehna. Sure, the so-called extra-marital fling is what drives the conflict in Kalank's love story, but the safe circumstances around the same don't make us feel the moral implications of Roop falling for Zafar while still being married to Dev.

Which is also because, there is a bit too much focus on expanding Roop and Zafar's romance than work on the deterrents around it. This is a pity, since some of the more interesting bits of Kalank are in the subplots surrounding this love story. The whole Dev-Satya-Roop saga is hastily developed and underwhelming, but it has its moments. Like that scene where Roop goes to Dev's office for the first time, days after marriage, and has an awkward encounter with him (though it is marred by shameless product placement. Pre-partition advertising, anyone?)

Even equally interesting is the side-conflict involving a moral debate between Dev and a hot-blooded Muslim League leader Abdul (Kunal Kemmu) whether corporatisation should take precedence over looking after the betterment of local skilled workers. But in the world of Karan Johar and Abhishek Varman's Kalank, such real-world discussions are just fillers (World War II and India gaining independence are swept under the rug) when the love story needs a break. With a runtime of about 168 minutes, do we really need such breaks, which also includes a couple of back-to-back introductory songs? Kalank Designer Manish Malhotra Reveals Some Crucial Details about Styling Madhuri, Sonakshi and Alia in this Period Saga.

Special mention must also be given for unnecessarily added bull-fighting sequence, purely present in Kalank to show of Zafar's bravado and Varun Dhawan's abs. It's another matter that the said scene turns out to be unintentionally hilarious because of some very shifty CGI.

At the heart of Kalank is the love story of Roop and Zafar, and let's be honest here. The only reason why we even feel invested in this dragging romance is because of Alia and Varun. Otherwise, this love is quite problematic in its setting, not because of its extra-marital angle, but because of how Zafar overwhelms Roop with his amorous advances. Zafar gets acquittal of his behaviour by the movie, is because he is played by a likeable actor. Even if we ignore that, which is hard enough, there is little to root for in this romance.

As a character, Zafar had potential though and his Trishul-inspired vendetta drive is understandable. Also intriguing is how he inadvertently creates his own demons with his misguided intentions. Which is why Varun's scenes with Abdul and his parents have more depth to them than his romantic sequences with Roop.

Roop, unarguably the character with stronger writing, gets more focus than anyone in the film. Roop is a multi-faceted woman who can sing and dance exceptionally well, which makes us wonder why she even needs classes from Begum apart from giving the movie a chance to let her meet Zafar. She has a good journalistic attitude, that also is later forgotten, while also offering marketing advice to her much-experienced husband. At one point, in the aforementioned bull-fighting scene, I even expected her to shove Zafar aside and take the bull by its horns, just like I wanted Alia to take the movie's flaws by its horns too. Unfortunately, nothing of that sort happened, either way.

Roop gets a lot of room to establish herself as a strong, driven character, a trait that loses its way when she is turned into this forlorn girl caught a love that never should have happened and a marriage that never should have solemnised. Compared to Roop and Zafar, the other main characters feel less explored, including Dev, Balraj, Bahar and an interesting Abdul, though, yes, they have their moments. Most unfair, though, is Kalank's treatment of Satya, whose arc had so much potential and pathos, but is ignored for the love story to develop.

Even the partition massacre in the climax makes its roots surrounding the romance and family drama. This leads to a clichéd, over-stretched finale that is too predictable, highly melodramatic with too much use of slow-motion to ruin discernible tension, if any.

Watch the trailer for Kalank here:

You can also not discount Sanjay Leela Bhansali's heavy influences, not just in the set-design but also in the screenplay. Kalank draws inspirations from some of SLB's popular works like Hum Dil De Chuke Sanam, Devdas and even Bajirao Mastani. There is weirdly a scene where the two male leads bond with each other without knowing their identities a la HDDCS, that also somehow manages to insert a parallel to an iconic scene from Yeh Jawaani Hai Deewani. The dialogues are sporadically powerfully, when they don't get too lost in applauding itself for trying to be inherently poetic.

That said, I loved how beautifully framed Kalank is in nearly every scene. Sure, like every KJo movie, Kalank makes me wonder, as to how the characters dress themselves up to match their surroundings. But the aesthetic value in the film is undeniably the best I had seen in recent times, kudos to Binod Pradhan's spell-binding cinematography and the terrific production design. I could just watch the Dussehra sequence during the lovely "Ghar More Pardesiya" track the whole day without getting bored. Pritam's score is mellow, but the Kalank theme feels quite familiar to AR Rahman's "Dreams on Fire".

Nearly every actor in the cast gives a good account of himself or herself, but the highlight of Kalank is definitely Alia Bhatt's mature performance in the best-written (comparatively) character of the movie. The young actress has been going strength to strength with every performance of hers, and Kalank is undeniably among her stronger acts. In fact, it is the movie that lets her down mostly towards the latter part where Alia is restricted to mostly trying to look miserable.

Varun Dhawan is enigmatic in a character, that is confused in its desire to keeping it in the grey area. The role of Zafar should have been challenging for the talented young superstar, but instead, the writers choose to not take risks with it. Madhuri Dixit Nene is graceful and she is a vision to behold in the dance sequences. Sanjay Dutt, in a special appearance of sorts, shines in the one sequence that involves Mads.

Aditya Roy Kapur plays the straight guy Dev a little too straight. Agreed that the movie doesn't let him many opportunities to voice his reasons, but that can't defend how stilted Aditya's performance feels at times. Sonakshi Sinha, in a very limited role, deserves better. Kunal Kemmu impresses as the malicious leader of the Muslim youth in Hira Mandi. Kiara Advani, in a cameo, gets less scope as one of the courtesans in Begum's haveli.

- Too Lengthy to Make an Impact

Kalank is beautiful to look at and boasts of an incredible cast with some good performances. And yet this love saga, which had the potential to be great, is tainted with a cluttered, over-stretched screenplay and a melodramatic treatment. Kalank might work for die-hard shippers for Alia Bhatt-Varun Dhawan pairing!

(The above story first appeared on LatestLY on Apr 17, 2019 01:58 PM IST. For more news and updates on politics, world, sports, entertainment and lifestyle, log on to our website latestly.com).