After Queen and Tanu Weds Manu Returns, Kangana Ranaut won her third Best Actress National Award for both Manikarnika: The Queen of Jhansi and Panga at the 67th National Film Awards. Adjudged so by N Chandra-led jury, it is an early birthday gift for the controversial actress who turns 34 on March 23, 2021. 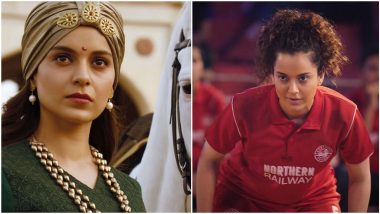 Kangana Ranaut in Manikarnika and in Panga (Photo Credit: Twitter)

After Queen and Tanu Weds Manu Returns, Kangana Ranaut won her third Best Actress National Award for both Manikarnika: The Queen of Jhansi and Panga at the 67th National Film Awards. Adjudged so by N Chandra-led jury, it is an early birthday gift for the controversial actress who turns 34 on March 23, 2021. This is in totality her fourth National Award win, starting with a Best Supporting Actress for Fashion. 67th National Film Awards: Kangana Ranaut Expresses Gratitude to Everyone As She Wins Best Actress Award for ‘Manikarnika’ and ‘Panga’ (Watch Video).

However. like everything else with Kangana these days, her win for the two films is creating some sort of confusion. Both her films - Manikarnika and Panga - were not released in the same year. Manikarnika (also co-directed by the actress) came out in January 18, 2019, and Panga in January 24, 2020. So certain sections of Twitterati are wondering how two films released in a year's gap were made eligible enough to get the actress a Best Actress nod.

Film #Manikarnika released in 2019 and film #Panga released in 2020. But Deedi #KanganaRanaut got award for both the films in 2021. Means #BJP has confirmed that there are no rules, no terms and conditions for anything during its rule. Anything can happen any time. 🤪😁

Some others even pointed out that Vicky Kaushal's Uri: The Surgical Strike which was released around the same time as Manikarnika, was eligible for the 66th National Film Awards, and even winning a few including the Best Actor for Kaushal. So why was Manikarnika not considered then, and rewarded Kangana for her performance in the next edition? Accusations are rife on social media, that the jury bent rules to shower glory on Kangana, who is a very vocal supporter of the ruling government. But the reality is something else. Let us explain how the rules work here.

First of all, you might be aware that the 67th National Film Awards, honouring the best in cinema of 2019, was deferred by a year owing to COVID-19 pandemic. As per the regulations of the awards, the films considered eligible for being considered is not as per their release date, but as per when they had been issued a censor certificate.

Now coming to Manikarnika: The Queen of Jhansi, the movie was certified on January 16, 2019 (check screenshot taken from CBFC website below), which makes it eligible for 67th National Film Awards.

Do note that Uri, which released on January 11, 2019, was censored in 2018. 67th National Film Awards Review: Despite a Few Fantastic Wins, Indian Cinema’s Most Honourable Awards Saga Continues Its Downward Spiral!

As for Panga, it was also censored in 2019 itself, going by the below screenshot once again taken from CBFC website, even though the film was released in 2020.

This regulation is also the reason why Priyadarshan's Marakkar: Arabbikadalinte Simham won three awards at 67th National Film Awards, including the Best Feature Film, despite still awaiting a release!

As for the other accusation on social media on whether Kangana truly deserves that honour, or was it given for her pandering to the ruling power, that's a different debate altogether. As for now, you can be assured that no rules had been broken by the jury to make Kangana a four-time National Award winner.

(The above story first appeared on LatestLY on Mar 23, 2021 04:35 PM IST. For more news and updates on politics, world, sports, entertainment and lifestyle, log on to our website latestly.com).