National Awards are nothing short of Oscars, as they choose to reward content over glam. However, it feels like cacophony is also a determinant factor for National Film Award juries, going by the recent trends. 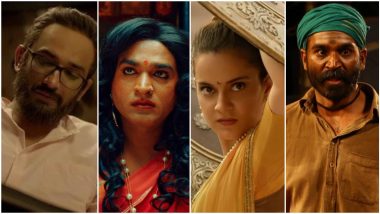 After a delay of one year thanks to COVID-19 pandemic, the 67th National Film Awards was announced for the films censored between January 1, 2019 to December 31, 2019. And just as it has been in the past few years, the awardees turned out to be wildly mixed bag of consistency when it came to honouring feature films and actors. National Film Awards have always garnered controversy over some very radical choice of winners, especially with the jury often been accused of playing partisan or giving awards to those pally with the ruling power. It hardly matters if that power was in the hands of the Congress or the present BJP government - the trend always persisted, but it is clearly more evident. Remember how Uri: The Surgical Strike, the present government's fave film during elections, won four National Awards in 2019? 67th National Film Awards: Kangana Ranaut Wins for Manikarnika, Manoj Bajpayee and Dhanush Share Best Actor Trophy; Check Out Full Winners’ List Here.

Returning to the present, let's talk about the good wins adjudged by the N Chandra-led jury. While I have not watched some of the movies that were honoured (so am trusting the good taste of the jury members in acknowledging them), there were some hearty wins that made me say 'Well deserved!' Be it the Special mention for the Malayalam film Biriyani, or Asuran and Jersey winning Best Film in their respective languages, I felt those wins were truly well-deserved.

I clapped my hands hard when Vijay Sethupathi won the Best Supporting Actor for his truly amazing performance in Super Deluxe. As I had written in my review for this masterpiece made by Thiagarajan Kumararaja, I had predicted this would bring a National Award win for this awesome actor. Super Deluxe Movie Review: Vijay Sethupathi, Fahadh Faasil and Samantha Akkineni-Starrer Is Whimsical, Riveting and Brilliant!

I should also have been in elation when Dhanush for Asuran and Manoj Bajpayee for Bhonsle both shared the Best Actor Award, if it was not for my shock at hearing the previous category award winner (more on her later... but didn't we expect it kinda?). They are excellent choices, and hardly anyone would debate on these wins. Though, I have to say Dhanush has the slight misfortune of never getting to hound the Best Actor win limelight wholly for himself. Last time he won the same award at the 58th National Film Awards for Aadukalam (2010), he had to share the honour with Salim Kumar for his stupendous act in the Malayalam film Adaminte Makan Abu. I also have to say I was slightly disappointed that Nivin Pauly missed out for a wonderfully chameleonic performance in Moothon. Unfortunately for him, the field was strongly contested. Moothon Movie Review: Nivin Pauly Stuns You With a Career-Best Act in Geetu Mohandas’ Haunting Film That’s Streaming on Zee5.

In other categories, Malayalam film Helen winning Indira Gandhi Award for Best Debut Film of Director is a fine choice (as well as for Make-Up Artist). Similarly, Gireesh Gangadharan winning Best Cinematography for his long takes in Jallikattu is perfect.

So while these wins among others are great, the disappointments that come with some bizarre wins do bring the show down. And these come in some of the major categories. I am unable to make my opinion for Priyadarshan's Marakkar - Arabikadalinte Simham winning awards in multiple categories including the Best Feature Film. Although censored on December 13, 2019, the movie's release has been delayed and is about to grace the screens in a couple of weeks. (Interestingly, director Priyadarshan was the head of the jury that was known for controversially rewarding Akshay Kumar with a National Award win for Rustom, while also giving superstar Mohanlal - also his best friend - a Special Award for Pulimurugan) From Akshay Kumar in Rustom to Priyanka Chopra in Fashion, 10 Bollywood Actors Who Won the National Film Award for the Wrong Movie!

However, I couldn't help but sniff some propaganda when an average film like Vivek Agnihotri's The Tashkent Files goes on to win Best Dialogues (for Agnihotri) and Best Supporting Actress (for Pallavi Joshi, in one of her most unmemorable roles, despite her having given much award-worthy performances earlier). Considering Vivek Agnihotri is know to be a close and often vocal supporter of the ruling government, the partisanship is very hard to be dismissed.

Similarly contentious is Kangana Ranaut's Best Actress win for both Manikarnika and Panga. While Panga has a much better performance from the actress - it is also one of my fave performances of last year - Kangana is extremely inconsistent in Manikarnika. There are scenes that she is really, really good, and there are scenes where she goes way over the top. Also, we can't help but remember how she kept on tweeting last year that she deserves National Award for her performance in the film that she co-directed, and if she is not given one, then National Awards are a sham. Looks like the jury caved in to her demands, just like the government ended up giving a Y-category security for her. The funny part is that, unlike the Best Actor category, the jury chose to let Kangana have the sole spotlight for herself.

Also, how long will National Film Awards continue to ignore the brilliance of Manju Warrier? Apart from a Special Mention she got back in 1998 (for Kannezhuthi Pottum Thottu), Manju has been getting disregarded by the jury for years, even though she is one of the finest actors in Indian cinema. If Dhanush was worthy a win for for his visceral performance in Asuran, so was Manju playing his fiery wife in the same film.

You might accuse me of being partisan to Malayalam cinema in the above piece, and I would admit that to some extent. But then Malayalam cinema also produced some of the best films of that year, and not many got acknowledged with wins.

But even moving on to other languages, Chhichhore's win as the best Hindi Language Film feels more to do with sentimentality behind the tragic demise of its lead actor than merit. While an enjoyable film, Chhichhore was hardly the best Hindi film of that year.

Similarly, Mahesh Babu's Maharshi winning Best Popular Film Providing Wholesome Entertainment (apart from best Choreography) is a shocker. While Maharshi might have been a success at the box office, this Vamshi Paidipally directorial was a tedious watch and offered nothing new. Boss, it was not even the best Telugu film of the year, you just gave that honour to Jersey (I would have been glad if they had choses this film instead!). Maharshi Movie Review: Mahesh Babu and Pooja Hegde’s Social Entertainer Taxes Your Patience.

I have been reading opinions on Twitter about how we should look beyond these contentious awardees and celebrate the lilting victories of a Biriyani or a Jyeshthoputro or Lewduh. Great argument.

But even Oscars - considered a Holy Grail by filmmakers worldwide when it comes to film awards - are bound to scrutiny, so why not our National Film Award? Does Parasite winning best Picture last year deflect the Academy of its lack of diversity? No, right? It is the weaker spots that bring an honourable institution down, and they need to be pointed out and worked upon. Especially for a movie buff like me, and many others like me who are tired of the paan masala award shows, National Awards are nothing short of Oscars, as they choose to reward content over glam. However, it feels like cacophony is also a determinant factor for National Film Award juries, going by the recent trends.

(The above story first appeared on LatestLY on Mar 22, 2021 08:59 PM IST. For more news and updates on politics, world, sports, entertainment and lifestyle, log on to our website latestly.com).