Kaun Banega Crorepati 12: Amitabh Bachchan Expresses Gratitude to a Fan Who Made a Rangoli to Commemorate His 51 Years in Bollywood!

Amitabh Bachchan's reality game show Kaun Banega Crorepati enjoys a huge fan following across the globe. Even the current season of the show has been garnering good response from the audiences. Check out the full story here. 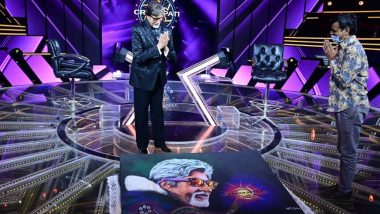 Amitabh Bachchan's reality game show Kaun Banega Crorepati enjoys a huge fan following across the globe. Even the current season of the show has been garnering good response from the audiences. However, this year due to COVID-19, things are a little bit different. Having said that, recently, Big B took to his Instagram and praised a fan for his artistic efforts towards him. The superstar shared an appreciation post which saw a rangoli dedicated to him by a fan to commemorate his 51 years in the film industry. KBC 12: Here's What To Expect From The New Season Of Amitabh Bachchan's Show And Where To Watch It.

In the pic shared, we can see Amitabh rejoicing over the fan's gesture and joining hands at him on the sets of KBC 12. Looks like the fan also happens to be the contestant of the show. Along with the pic, Big B wrote, “No .... that be not a painting .. that be ‘rangoli’ made by the yonder gentleman to commemorate my 51 years in the Industry .. please read the date at the bottom of the ‘rangoli’ it’s 7 Nov 1969 , and the name Saat Hindustani .. the date of my first film release!! Presented to me on the 7th of Nov 2020!” Kaun Banega Crorepati 12: Nazia Nasim Wins Rs 1 Crore, Becomes the First Crorepati of the Season on Amitabh Bachchan Hosted Reality Game Show (Watch Video). a

FYI, Senior Bachchan made his acting debut as one of the seven protagonists in the film Saat Hindustani, helmed by Khwaja Ahmad Abbas. Meanwhile, talking about KBC, the show is all set to get its first crorepati on November 11 and it's going to be Nazia Nasim. The promo of the same is already out. Stay tuned!

(The above story first appeared on LatestLY on Nov 09, 2020 08:43 AM IST. For more news and updates on politics, world, sports, entertainment and lifestyle, log on to our website latestly.com).