Kiara Advani Turns 29: Lesser-Known Facts About the Shershaah Actress on Her Birthday!

As the stunning beauty from the tinsel town, Kiara Advani celebrates her birthday on July 30, we take a look at some unknown facts about the Shershaah actress. Read on! 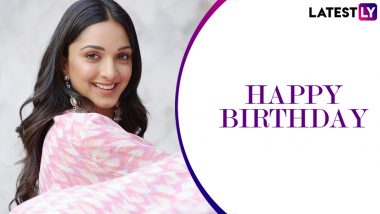 Kiara Advani is no new to showbiz. She has been here since 2014 and we've seen her grow as an artist with every film. She made her acting debut with Fugly and slowly and steadily charmed her way into the hearts of many. M.S. Dhoni: The Untold Story, Kabir Singh, Good News, Laxmmi Bomb are a few of her hits that got her noticed. She was also lauded for her role in Lust Stories. Now, she has Shershaah opposite rumoured beau Sidharth Malhotra. But the road to success for the actress was not a cakewalk as she also faced a lot of ups and downs careerwise. And as Kiara celebrates her 29th birthday today (July 29), we would like to tell you more things about her that we bet you are unaware of. So, let's get started. Kiara Advani Returns With Another Stunning Photo for Dabboo Ratnani’s 2021 Calendar (View Pic).

Yes, that is right! Kiara's actual name is Aaliya which she changed on the suggestion of none other than Salman Khan. She had mentioned on Voot's Feet Up with the Stars Season 2 that Sallu had told her to get a new name as there can't be two Aaliya's in the industry.

We all know that how difficult it is to search for the right name. However, seems like it was easy for Aaliya to pick a new name. As she was inspired by Priyanka Chopra Jonas' character 'Kiara' from the film Anjaana Anjaani that also starred Ranbir Kapoor. Woah!

In a video by Tweak India, Kiara had talked about her near-death experience. She mentioned that it was during a college trip to McLeod Ganj with her classmates when her room caught fire and the rest is history. Watch the video on the same below.

Kiara Advani is brainy, must say. As she has completed her education at The Cathedral and John Connon School, Mumbai. That's not it, as she further also studied in South Mumbai's elite college Jai Hind and has a Mass Communications degree from the same. She has also done acting courses. Kiara Advani Shares an Underwater Picture in a Neon Green Bikini But It’s Her Inspiring Caption That’ll Win You Over!

Kiara is not an outsider and is connected to the filmy scenes via the maternity side. We bet you didn't know this! FYI, Ashok Kumar and Saeed Jaffrey are Kiara's step-great-grandfather and great-uncle, respectively. However, that's not it, as actress Juhi Chawla is also her aunt.

That's it, guys. These are some of the least known facts of Kiara that not all know about. Workwise, Kiara's upcoming film Shershaah is all set to have a digital release on Amazon Prime Video on August 12. Happy birthday, KA!

(The above story first appeared on LatestLY on Jul 31, 2021 12:00 AM IST. For more news and updates on politics, world, sports, entertainment and lifestyle, log on to our website latestly.com).