The ongoing second wave of the pandemic has affected us in many different ways, including taking a toll on mental health. Actress Kirti Kulhari reveals what she does to lift her spirits when she feels down. 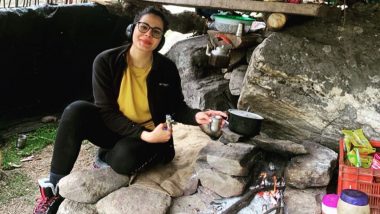 The ongoing second wave of the pandemic has affected us in many different ways, including taking a toll on mental health. Actress Kirti Kulhari reveals what she does to lift her spirits when she feels down. "I travel. I know it's been a very tough time, but for me travelling is a time when I really connect with myself and I just look at how much life has to offer! Also, what helps me is the attitude of acceptance. When something is the way it is, you just have to accept and look at what you can do to make yourself and people around you feel better in that situation," Kirti told IANS. Shaadisthan Star Kirti Kulhari Gets the First Jab of COVID-19 Vaccine.

The actress recently went on a solo trip to Uttarakhand and shared photographs and videos on social media of what she calls her "experience of a lifetime". Opening up on her trip, Kirti shared: "I went for a mountain trek, up to 11,000 feet for six days. This was the first time I've actually been on a trek. It was one of the most memorable experiences of my life and Uttarakhand in terms of nature and beauty is beyond words." Shaadisthan: Kirti Kulhari Reveals Why She Could Instantly Relate to Her Character in the Upcoming Road Trip Film.

"Those six days, there was zero network and I was almost disconnected from the world. I was just in the middle of nature, sleeping under the stars in small camping tents. It was an experience of a lifetime. I am surely going to do more of this," she added. Almost in sync with what she says about loving to travel, her new release "Shaadisthan" is a road trip movie. She plays Sasha, lead singer of a four-member music band that is on their way to Rajasthan in their tour bus.

"I loved shooting in Rajasthan. It is a huge place and there is so much to explore. Vijay Nagar, where we were shooting, is an hour away from Ajmer Sharif, which I visited for the first time. We stayed in a really old house of a king, which was great. I also visited Pushkar, which I've never been to," Kirti revealed. Did she pay a visit to her family residing in her hometown Pilani after the shoot? "No this time I didn't, actually. Very recently I had paid a visit to my grandparents. So, I used the free time to do these (travelling around), instead of going back to my hometown," the actress replied.

She describes Sasha in "Shaadisthan" as "somebody who symbolises freedom and is grounded". The actress revealed what intrigued her to be a part of the film. "The subject of the film, which talks about freedom of choice, and of course the character of Sasha, which is very layered," she says, about what attracted her, adding: "I've been very fascinated by musicians and their world. So, this was my chance to live it."

Kirti also spoke about how she used very little or no makeup to make Sasha close to real life. "Sasha is not somebody who is a made-up person. She is a performer and entertainer who will dress up whenever she is on the stage. Otherwise, she is very comfortable in her skin and likes going without makeup.

"I also feel, when you are shooting in natural light a lot of times, zero makeup looks really good. Also, people around us do not roam around in makeup in real life all the time. So, it is very real to watch real people on screen and that's what people relate to," she suggested, about her character in the film, which was released on Disney+ Hotstar.

(The above story first appeared on LatestLY on Jun 14, 2021 10:31 PM IST. For more news and updates on politics, world, sports, entertainment and lifestyle, log on to our website latestly.com).