Shaadisthan: Kirti Kulhari Reveals Why She Could Instantly Relate to Her Character in the Upcoming Road Trip Film

The trailer of the Kirti Kulhari-starrer film Shaadisthan released on Friday. Talking about her character Sasha in the road trip film, Kirti says she could instantly relate to it. Shaadisthan features Medha Shanker, Nivedita Bhattacharya and real-life musicians Shenpenn Khymsar, Apurv Dogra and Ajay Jayanthi, with Kay Kay Menon in a cameo. 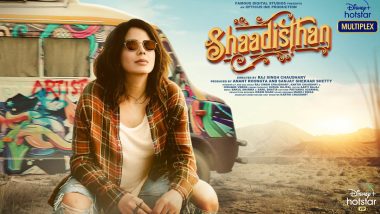 The trailer of the Kirti Kulhari-starrer film Shaadisthan released on Friday. Talking about her character Sasha in the road trip film, Kirti says she could instantly relate to it. "I could instantly relate to my character Sasha -- an unapologetic, strong and confident young woman who lives life on her own terms, strives to shatter stereotypes, and isn't worried about being judged by anyone. Shaadisthan is not only an entertaining movie but also holds a mirror to society and the conditioning it imposes on people and how people live by it as if it's their truth," Kirti shared, talking about her role and the film. Shaadisthan Trailer: Kirti Kulhari's Adventure-Drama Is All About Self-Discovering Oneself on a Road Trip (Watch Video).

The film narrates the journey of four young and free-spirited musicians, a smalltown couple and their young daughter in a camper van, travelling from Mumbai to a small town in Rajasthan. It aims to deliver the message that being unconventional doesn't equate to being morally wrong. Talking about his upcoming directorial, Raj Singh Chaudhary revealed that the film is inspired by a story from his own life. Shaadisthan: Kirti Kulhari Is 'Cool as a Cucumber and Hot as Fire' in Her Next Film, Trailer To Unveil Tomorrow (View Post).

The director said: "Shaadisthan is a really special movie to me as it is inspired by a story in my own life. The movie is well crafted in a way that the audiences can find their bits of entertainment while understanding an important social issue. Each character in the movie is unique and celebrates its individualism and all the other elements of the movie are inspired by real life scenarios."

(The above story first appeared on LatestLY on Jun 04, 2021 09:16 PM IST. For more news and updates on politics, world, sports, entertainment and lifestyle, log on to our website latestly.com).