The actress revealed as much while interacting with the media at a special screening of her latest release, 'Pagalpanti', which she hosted along with co-star Pulkit Samrat on Friday in Mumbai. 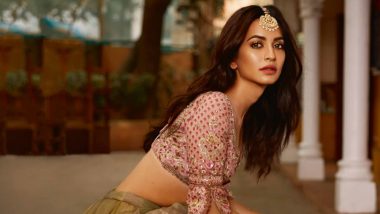 Mumbai, November 23: Actress Kriti Kharbanda is no longer a part of the upcoming thriller "Chehre", starring Amitabh Bachchan and Emraan Hashmi. Kriti cites lack of dates as the reason.

The actress revealed as much while interacting with the media at a special screening of her latest release, "Pagalpanti", which she hosted along with co-star Pulkit Samrat on Friday in Mumbai. Kriti Kharbanda Is Dating Pulkit Samrat! The Pagalpanti Actress Makes It Official.

The development that Kriti will not work in "Chehre" came amid reports that she had a fallout with the producers of the film.

Dismissing such reports, Kriti said: "Unfortunately, I have left the film. We have mutually decided that I will no longer be a part of that film. Shooting of 'Chehre' was supposed to begin in August-September but then it got pushed to October-November. I already had commitments with 'Housefull 4' and 'Pagalpanti' so unfortunatel, there was nothing that I could do to change my dates."

The production house, Anand Pandit Motion Pictures, issued a clarification claiming: "In the light of recent media reports, we wish to clarify that @kriti_official and @apmpictures have mutually agreed to part ways on a cordial and professional note. We wish her success in all her future endeavours." Lovebirds Pulkit Samrat and Kriti Kharbanda Twin in Pink for Pagalpanti Promotions (View Pics).

The statement was issued on the banner's Twitter account. "Chehre", directed by Rumy Jaffery is slated to release on April 24, 2020.

(The above story first appeared on LatestLY on Nov 23, 2019 10:46 PM IST. For more news and updates on politics, world, sports, entertainment and lifestyle, log on to our website latestly.com).