Kriti Sanon Opens Up About Launching Her Fitness App ‘The Tribe’, Talks About Her New Journey as an Entrepreneur 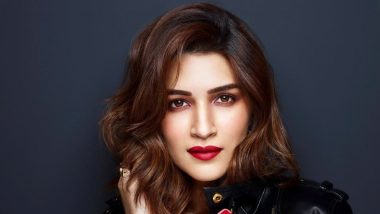 Bachchhan Paandey actress Kriti Sanon, who started her Bollywood journey with Heropanti, has clocked eight years in the Hindi film industry. On the occasion, the actress made an announcement about embarking upon a new journey as an entrepreneur. Kriti will soon be launching a fitness app called 'The Tribe' after discovering her passion for fitness during the filming of her project, 'Mimi' where she had to undergo a physical transformation in order to look the part of a pregnant woman. How To Wear Yellow in Summers? From Kriti Sanon to Ranveer Singh, 7 Bollywood Celebrities Aced This Tricky Colour.

The actress took to her Instagram as she shared a picture with her team. She wrote in the caption, "They say Your Vibe Attracts Your Tribe. I have always been someone who believes in pushing people I truly believe in and today stands for exactly that." She continued in her caption, "8 years ago, I started my journey as an actor in the hindi film industry with the help of people who believed in me and gave me wings to fly! Today, 8 yrs later, exactly on the same day, I am thrilled to announce my journey as an Entrepreneur with my three amazingly talented Co-founders Anushka Nandani, Karan Sawhney and Robin Behl as we launch our Passion Project 'The Tribe'." Ganapath Part 1: Kriti Sanon Arrives in Ladakh for the Shoot of Her Upcoming Action-Thriller.

Sharing how fitness became a major part of her lifestyle and how it opened up new avenues for her, Kriti wrote, "I discovered my personal fitness journey post MIMI when I had to shed the 15 kilos I had put on for the film and we hit a lockdown where gyms were shut. Robin, Karan and Anushka became a Huge part of this journey of mine and made me realise that to stay fit."

Following a strict fitness regime is all about motivation and the right company. As Kriti states in her social media post, "All you need is motivation, the right guidance and someone who can make workouts fun for you no matter where you are. We at The Tribe believe in motivating you to become the best and the fittest version of yourself -- Be it with in-studio, group/personal or virtual sessions with some of the coolest, youngest & fittest trainers who will not only push your limits but also make workouts super fun."

Giving her followers a sneak peek about the app launch, the actress rounded up her post by writing, "Also excited to announce that we will be launching The Tribe App later this year which will give you access to anything and everything to do with Fitness & Mindfulness no matter where you are. Till then Join @thetribeindia and #KeepMoving."

Meanwhile, on the work front, Kriti has a string of upcoming big ticket releases like 'Ganapath', 'Adipurush', 'Bhediya', 'Shehzada' and Anurag Kashyap's unannounced next which gave an impression of it being the Indian remake of Quentin Tarantino's iconic film 'Kill Bill'. However, Kriti had later clarified as she told the media that the film is not a remake as Anurag Kashyap is not really in favour of mounting and directing a remake.

(The above story first appeared on LatestLY on May 23, 2022 03:45 PM IST. For more news and updates on politics, world, sports, entertainment and lifestyle, log on to our website latestly.com).