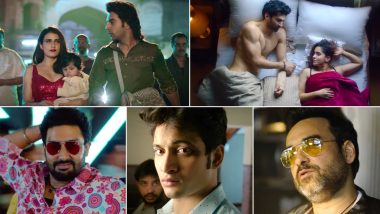 This year, the film industry had to take some tough and harsh decisions owing to the COVID-19 pandemic. One of them was to forgo theatre gains for OTT presence as the cinema halls were shut as well. No filmmaker wants a direct to digital release but 2020 left them with no options. Many have already released while some are ready to do so and one of them is Ludo. Anurag Basu's anthology film was supposed to release in April this year but due to the pandemic, it will now hit Netflix on November 12. This will be one of the Diwali releases of this year after Laxmmi Bomb albeit on an OTT platform. Ludo on Netflix: Rajkummar Rao Drops a Glimpse of His and Fatima Sana Shaikh’s Tale from the Anurag Basu Anthology (View Pic)

Ludo, as we all know as a game, has four squares of different colours. Basu's movie two has four characters and the many situations they get into. At one point in time, all their lives converge to one point. Abhishek Bachchan has kidnapped a kid, Rajkummar Rao is ready to break-out the man who fathered his crush's kid, Aditya Roy Kapur is lost while Pankaj Tripathi is a happy-go-lucky gun-totting mafia boss. Quite an eclectic mix!

Check out the trailer of Ludo here...

Rajkummar Rao seems like a Bollywood fan in this movie where he is seen doing the Mithun da style pelvic thrusts and even adds a weird spin to 'Hum tumme itne ched karenge...' His picture where he is dressed like a woman had left internet talking many months back and so, this is one character we are really looking forward to. There's also Tripathi!

(The above story first appeared on LatestLY on Oct 19, 2020 01:48 PM IST. For more news and updates on politics, world, sports, entertainment and lifestyle, log on to our website latestly.com).