Ludo on Netflix: Rajkummar Rao Drops a Glimpse of His and Fatima Sana Shaikh's Tale from the Anurag Basu Anthology (View Pic) 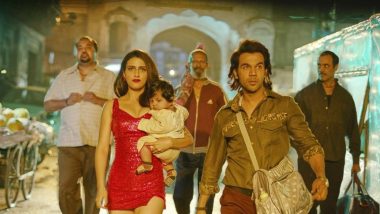 Anurag Basu is all set to release his multi-starrer Ludo on Netflix and we bet after checking out the teasers posted by actors for the #ComeonNetflix announcement, we bet you have been more than excited to catch a glimpse of these films. Rajkummar Rao recently took to Instagram to release a still from Ludo's anthology featuring him and Fatima Sana Sheikh. The duo are collaborating together for the first time and we are more than excited for the same. The still shared by Rajkummar Rao looks intriguing with him and Fatima accompanied by a child. #ComeOnNetflix: Kajol, Nawazuddin Siddiqui, Janhvi Kapoor and Others Drop Major Hints About their Upcoming Releases on OTT Platform.

Sharing the motion picture, the actor wrote, "Watch four players take fate into their own hands in a high stakes game where nothing is a coincidence and everything is planned." The dark anthology comedy film also stars Aditya Roy Kapur, Abhishek Bachchan, Sanya Malhotra in other stories and we are yet to see glimpses of their roles in the film. In the picture shared by Raj, the actor can be seen in a casual look whereas Fatima Sana Sheikh is seen wearing a shiny red dress. Dolly Kitty Aur Woh Chamakte Sitare: Konkona Sen Sharma and Bhumi Pednekar's Next to Premiere on Netflix?

In one of the earlier stills from the film that had been released by the makers, Rajkummar Rao was seen dressed as a woman and looked absolutely unrecognisable in it. Apart from Ludo, Netflix India is all set to drop 16 other originals featuring major celebs and we bet you are excited for the same. Stay tuned for more teasers and stills of other films to be out soon.

(The above story first appeared on LatestLY on Jul 16, 2020 10:12 AM IST. For more news and updates on politics, world, sports, entertainment and lifestyle, log on to our website latestly.com).