Rashmika Mandanna will be seen essaying a pivotal role in an espionage thriller, Mission Manju that chronicles the journey of a RAW agent who heads India's covert operation on Pakistani soil. 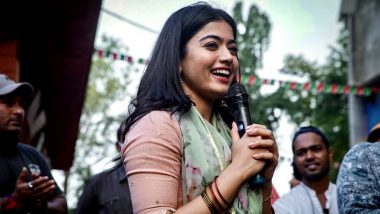 Popular south Indian star Rashmika Mandana is making her debut in Bollywood with Mission Majnu that also stars Siddharth Malhotra and producer Amar Butala has praised the actress. Amar said, "Rashmika has made Mission Majnu an incredible journey. With her extraordinary vibe, she's made this film even more special. Her fans are so thrilled about her Hindi debut that it felt great to work around that energy." Rashmika Mandanna Shifts Into a New Apartment in Mumbai With Her Pooch Aura (View Post).

Rashmika will be seen essaying a pivotal role in an espionage thriller that chronicles the journey of a RAW agent who heads India's covert operation on Pakistani soil. The actress will be sharing the screen with actor Sidharth Malhotra and their prospective chemistry has heightened the build-up of the film. Mission Majnu: Sidharth Malhotra, Rashmika Mandanna Begins the Shoot of Shantanu Bagchi Directorial in Lucknow (See Pic).

(The above story first appeared on LatestLY on Aug 29, 2021 08:50 PM IST. For more news and updates on politics, world, sports, entertainment and lifestyle, log on to our website latestly.com).