Nargis Birth Anniversary: 5 Lesser Known Facts About The Legendary Actress That Will Leave You In Awe Of Her

Nargis Dutt, the epitome of feminine charm and legendary acting prowess, was born today. On her birth anniversary, we remember her by sharing these cool facts about her. 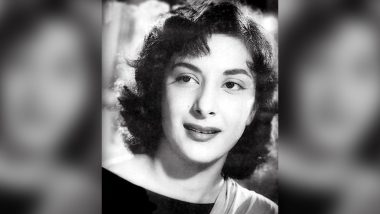 Words fall short to describe who Nargis Dutt was. She was an enigma, a kindred soul, a superb performer, a devoted social worker, a loving mother and a loyal wife. And yet she was so much more. The void she left behind since her death has still not been fulfilled and we know no one can even fill it because there can never be another Nargis. Born as Fatima Rashid, Nargis began her journey at the tender age of 4 when she acted in Talash-E-Haq. Since then, it had been an interesting journey of Baby Nargis becoming Nargis, the reigning queen of Indian cinema. Wish You Were with Me Today: Sanjay Dutt Remembers Mother Nargis

Nargis had said in an interview, “A woman can by instinct be a better artist than a man for the simple reason that you’ll find much more depth and understanding in her portrayal.’’ And we truly believe that. On her birth anniversary today, let us tell you some interesting facts about the most fascinating female actor of Indian Cinema - Nargis.

#More than the male actors

As per an article on National Herald, Nargis used to command more money than her male counterparts. She was paid Rs 10000 for Raj Kapoor's Aag even though she was a last-minute entry.

Nargis was bestowed with the fourth-highest civilian award Padmashree and she was the first actress to receive it.

Nargis was also the first actress who won the National Film Award in the Best Actress category for her role in Raat Aur Din. It was the first time the awards were doled out.

Nargis had succumbed to pancreatic cancer. Before leaving for treatment in the US, she wrote a letter to her husband Sunil Dutt. It read, "Please look after Sanju, see that he does not get mixed up with those silly boys again. He is too stupid in his head, he does not realise what he is doing and knows it is going to hurt him.”

Quoting Nargis' daughter Namrata, TOI mentioned, "She was a great swimmer. As a young girl, she played cricket and football with her brothers - Anwar and Akhtar Hussain. She was a pucca tomboy!"

(The above story first appeared on LatestLY on Jun 01, 2020 08:30 AM IST. For more news and updates on politics, world, sports, entertainment and lifestyle, log on to our website latestly.com).