The second season of NEXA Music, an initiative to provide aspiring Indian musicians a platform to create international quality English music, was announced on Thursday at Grammy and Oscar-winning composer A.R. Rahman's studio in Mumbai 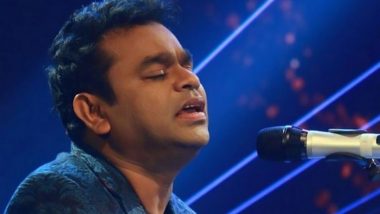 The second season of NEXA Music, an initiative to provide aspiring Indian musicians a platform to create international quality English music, was announced on Thursday at Grammy and Oscar-winning composer A.R. Rahman's studio in Mumbai, following the success of its first season which concluded in February 2020. Like the previous season, a total of 24 contestants will be shortlisted by the jury comprising of Rahman, NEXA and Qyuki, from all the entries received. Baab: AR Rahman Teams Up With UAE’s First Woman Filmmaker Nayla Al Khaja for Upcoming Film.

Speaking on the occasion, Rahman said in a statement, "India is buzzing with youth, energy and undiscovered raw talent. I am happy to be part of NEXA Music in its Season 2 and look forward to finding unique voices and brilliant talent across the country. Qyuki and NEXA are building a much-needed tradition by fostering the next generation of Indian musicians." NEXA Music season 2 will have two segments � NEXA Music Lounge and NEXA Music Lab. AR Rahman’s Daughter Khatija Rahman Ties the Knot With Riyasdeen Shaik Mohamed (View Pic).

The original tracks of the shortlisted artistes will be professionally reproduced in a music video featuring the artiste. Out of the 24 artistes, the top 4 will be shortlisted and declared as the Super Winners of Season 2. These artistes will get to compose an additional new original English song under the mentorship of the music producer and will be featured in their respective music videos. The NEXA Music Lounge will be headlined by top Indian artistes in the English music space and will see the super winners of Season 1 becoming contributors.

The album name of these marquee songs will be titled 'Elevate' which signifies the journey, an artiste goes through on NEXA Music, which elevates them to the next level creatively and literally.

(The above story first appeared on LatestLY on May 12, 2022 02:59 PM IST. For more news and updates on politics, world, sports, entertainment and lifestyle, log on to our website latestly.com).