Nushrratt Bharuccha’s Deedar De from Chhalaang v/s the Original Song from Dus - Which Track Has Your Vote?

'Old is Gold' they say. But do you believe in this saying? Do you think the original Deedar De is still the best or do you believe the remake is better? 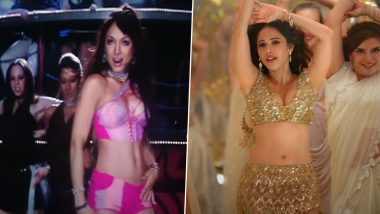 Remakes aren't leaving Bollywood anytime soon. No, we aren't just talking about remaking the old classics but also the songs - a trend that's, unfortunately, gaining momentum with each passing day. While some like 'Dilbar' succeed in making an equally admirable composition, others like 'Ek, Do, Teen' fail miserably and how! Coming to the recent number from the same lot, Deedar De, the song picturised on Nushrratt Bharuccha from Chhalaang is a decent one, to say the least. Shaan on Increasing Trend of Bollywood Song Remakes: Why Are They Still Doing It When People Are Not Liking It?

Sung by Asees Kaur & Dev Negi, Deedar De song from Rajkummar Rao's Chhalaang has the potential to find a place in the list of 'decent' remakes. While there's nothing bad about the composition, there's nothing exceptional either. Good part? Well, it's Nushrratt definitely and her hot moves. While the actress is yet to flaunt her dancing skills and we aren't aware of how good she can be, she has completely justified this new track. Kudos to choreographers, Bosco & Caesar for it. Chhalaang Song Deedar De: Nushrratt Bharuccha’s Glam Avatar Leaves Rajkummar Rao Stunned in This Groovy Rendition (Watch Video).

Coming to original, well, Sunidhi Chauhan can never disappoint, can she? The original song belongs to 2005 release, Dus that starred Sanjay Dutt, Suniel Shetty, Abhishek Bachchan and Zayed Khan in lead. This was an item song that became an instant favourite with the masses. We knew its remake would come out eventually, never knew it would be so soon!

'Old is Gold' they say. But do you believe in this saying? Do you think the original track is still the best or do you believe the remake is better? Vote for your option in the box below or simply tweet us your answers @latestly.

(The above story first appeared on LatestLY on Nov 10, 2020 06:08 PM IST. For more news and updates on politics, world, sports, entertainment and lifestyle, log on to our website latestly.com).