Sanjay Dutt's multi-starrer film Prassthanam heads for a theatrical release in India on September 20. The film is an official remake of a 2010 Telugu movie of the same name and clashes with five films on the Indian box-office. 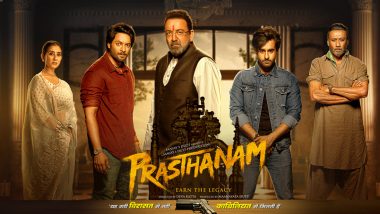 Apart from multiple competitors this week, another box office threat for the Sanjay Dutt film comes from Ayushmann Khurrana's Dream Girl and Shraddha Kapoor, Sushant Singh Rajput's Chhichhore, past releases which are still pulling audiences to the theatres. However, If Prassthanam turns out to be a gripping political drama, we might see a growth in screen count in the coming week. Before you plan to watch Prassthanam in the cinema near you, here is everything you need to know about the film. Prassthanam Title Track: Seeing Sanjay Dutt, Manisha Koirala, Jackie Shroff in One Song Will Make the 90s Kid in You Very Happy (Watch Video)

Prassthanam's plot revolves around a rural politician who marries a widow with kids and earns a respectable position. He completely relies on his stepson more than his own blood when it comes to political matters which heats up their family feud.

Here is the official trailer of Prassthanam:

The multi-starrer movie is reportedly made on a budget of Rs 40 crores including print and advertising cost. Which means, the Sanjay Dutt film needs to cross the Rs 70 crores mark to be a super-hit movie.

Prassthanam's music is composed by Ankit Tiwari, Farhad Samji and Vikram Montrose while its lyrics are penned by Farhad Samji.

Here is the complete audio jukebox of Prassthanam:

Prassthanam might be a crowd-puller in the interiors attracting the single screen audiences. LatestLY predicts Sanjay Dutt's film to earn somewhere around Rs 3 - 4.5 Crore in its opening day. Although we feel it might struggle to reach the double-digit numbers if we speak about its opening weekend gross.

Prassthanam Movie Review is not out yet. Latestly will update you with its movie review. So do not forget to keep an eye on our website to catch our thoughts on the film.

(The above story first appeared on LatestLY on Sep 17, 2019 10:33 PM IST. For more news and updates on politics, world, sports, entertainment and lifestyle, log on to our website latestly.com).