Priyanka Chopra Jonas says she is a little more creative and a little more fearless, and she wants to hold onto the feeling while navigating her career in India and abroad. Her recent roles have included a supporting act in the Hollywood film Isn't It Romantic. 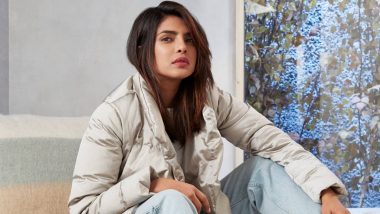 Actress Priyanka Chopra Jonas says she is a little more creative and a little more fearless, and she wants to hold onto the feeling while navigating her career in India and abroad. Over the years, the actress says, she has found a certain confidence where she wants to take chances, and not stick to what is perceived safe. Priyanka Chopra Jonas Signs First Look TV Deal With Amazon Studios, Shares The Big News On Social Media!

"I think I am a little bit more fearless. I don't know if that has to do with being exposed to global entertainment, but to certain confidence over the years that I have found myself where I like to take chances," Priyanka told IANS in an interview. Priyanka Chopra Jonas Congratulates Dia Mirza And Vaibhav Rekhi On Their Wedding! Actress Says, ‘So Happy For You D’.

The actress continued: "And for the first time, I have the ability to tell the story and I can. So I'm actually taking advantage of that. I don't know if that has to do with where I am globally or it's just me as a person after working for as many years as I have. But I'm in a creatively amazing place."

Priyanka's recent roles have included a supporting act in the Hollywood film Isn't It Romantic, starring opposite Farhan Akhtar in the Bollywood film The Sky Is Pink, playing a prop as Pinky Madam in The White Tiger, besides backing the horror story Evil Eye.

"When I read it (The White Tiger) 10 years ago, it stayed with me for a very long time. So, when I heard that the book was being made, I thought I have to be a part of this movie. My part is not an integral part of the movie, it's Balram's film technically and his relationship with our characters, but I just feel that the story was so relevant," she said.

"It will be relevant till we make massive changes, not just within India, but within countries, in developing economies around the world," added the actress, who is married to pop star Nick Jonas.

(The above story first appeared on LatestLY on Feb 18, 2021 11:15 AM IST. For more news and updates on politics, world, sports, entertainment and lifestyle, log on to our website latestly.com).