Priyanka Chopra's IG story is making us really hopeful. The actress promises something is coming up as the journey is not over and all of it is written in Hindi. We are hoping she has signed a Hindi film and will soon make some announcements. 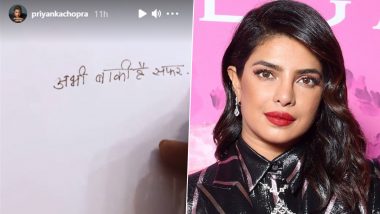 Priyanka Chopra took to her Instagram page and uploaded a Story which has the actress writing 'Abhi baaki hai safar' (there's more to the journey). There's also 'Jald Aa Raha' (Coming soon) written below. All this is making us wonder if Priyanka has signed a new Hindi film. Her last release in India was The Sky Is Pink that released in 2019. It is definitely good news because we have missed out desi girl on screen for a while now. Priyanka Chopra Jonas Reveals Why She Is ‘A Little Bit More Fearless’ Now

Priyanka has been doing quite a lot in the last couple of months despite all the lockdowns. She shot two movies and also finished her memoir Unfinished. There was also the release of The White Tiger on Netflix that received a lot of praise. Priyanka had told PTI recently, "I am never defined by my work, which is why I have the ability to do multiple things. I never believed that if my next film doesn't do well, or if I don't get the leading part in a movie, my career is over.

“I have never ever felt that. I was raised with enough confidence to know that I can pivot into anything else. I can choose to do anything I want."

Priyanka Chopra will be next seen on the big picture in the Matrix series along with Text For You.

(The above story first appeared on LatestLY on Mar 04, 2021 03:21 PM IST. For more news and updates on politics, world, sports, entertainment and lifestyle, log on to our website latestly.com).