Ram Gopal Varma in a series of tweets called up Karan Johar, Salman Khan, Shah Rukh Khan, Aditya Chopra for not saying anything against Arnab Goswami who has been dragging their names in a lot of reportages. All that to announce a movie on the news anchor. 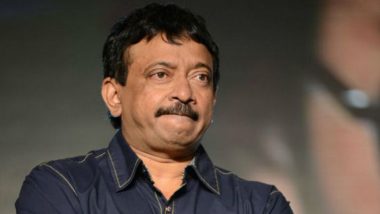 Arnab Goswami has been doing a lot of special debates on Bollywood, be it on Sushant Singh Rajput's death case or mafia in the industry or the actors' alleged ISI links. One man who now wants to get mileage out of all that Arnab is doing is Ram Gopal Varma. In a series of tweets, he blasted Shah Rukh Khan, Salman Khan, Karan Johar, and others for not pulling up Arnab for his 'falsifications' only to announce a film on the journalist and his way of giving news reports. He calls its Arnab - The News Prostitute. Ram Gopal Varma Fined for Film Posters on Govt Property

RGV being RGV also tweeted what happens if Goswami reacts to his announcement. He will just use that as publicity. At least the man is honest about what he wants to do with every move.

Check out the tweets here...

Was shocked to see #ArnabGoswami talking about Bollywood in such a horrible way ..He calls it the dirtiest industry ever with criminal connections ,it’s full of Rapists, gangsters, sexual exploiters and what not?

And why the hell are you guys #AdityaChopra , @karanjohar , @MaeshNBhatt @iamsrk @BeingSalmanKhan and so many others are so scared of the barking #ArnabGoswami that u are hiding under the tables of ur plush offices ???

Silence is not always golden, RGV explains why

If u guys #AdityaChopra , @karanjohar , @MaheshNBhatt @iamsrk @BeingSalmanKhan are so scared that if u speak against him ,it might go against the current public sentiment don’t forget that it’s him, who aroused that sentiment and ur silence is making u all look guilty for sure

This is what the industry needs to do according to him

Here comes the real reason behind the tweets

My film on him is titled

After extensively studying him I mulled on whether the tagline should be The News Pimp or The News Prostitute though both are relevant I finally settled on prostitute for its sound.

He doesn't care if Arnab reacts, but if he does, good for RGV

A note of caution, RGV says

RGV mentions how the 'lack of spine' in the industry is letting Arnab come up with such reportages. What do you think about that? We do wonder why are these people so silent when their names are being maligned so much on national television.

(The above story first appeared on LatestLY on Aug 03, 2020 02:56 PM IST. For more news and updates on politics, world, sports, entertainment and lifestyle, log on to our website latestly.com).