Ranbir Kapoor Birthday Special: From Brahmastra, Shamshera to Animal, Lets Take a Look at Every Upcoming Film of the Rockstar Actor

Bollywood's dashing star Ranbir Kapoor has 4 films under the pipeline although fans might still be disappointed to know that none of the RK movies is near the release. Let us not waste any time and quickly take a look at every upcoming film of Birthday boy Ranbir Kapoor. 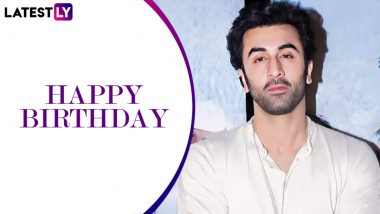 Ranbir Kapoor is turning 39 today and Bollywood's charming actor has some interesting projects lined up for release. The Wake Up Sid actor is dating Alia Bhatt and fans of the two superstars are eagerly waiting for the release of their most anticipated film Brahmastra. Ranbir has an interesting filmography straightaway from his Bollywood debut in 2007 with Sanjay Leela Bhansali's Saawariya that tanked at the BO. The actor had some hits and misses with failed films like Roy, Besharam or Jagga Jasoos but then he even impressed us with his performances in Tamasha, Rockstar and Barfi. Ranbir Kapoor and Alia Bhatt To Tie the Knot in Jodhpur? Their Recent Trip to the City Hints So!

Bollywood's dashing star has 4 films under the pipeline although fans might still be disappointed to know that none of the RK movies is near the release. Let us not waste any time and quickly take a look at every upcoming film of Birthday boy Ranbir Kapoor. Alia Bhatt Celebrates ‘Papa’ Mahesh Bhatt’s 73rd Birthday in Style With Sister Pooja Bhatt; Beau Ranbir Kapoor Also Part of the Celebrations (View Pics)

Ranbir Kapoor, Alia Bhatt, Amitabh Bachchan, Nagarjuna starrer fantasy adventure Brahmastra is said to be one of the most expensive project ever made by Dharma Production and the most expensive Hindi film ever made in Disney + Hotstar with a whopping budget of 150 Crores. However, fans are still eagerly waiting for the release of this Ayan Mukerji directorial that also stars Mouni Roy and Dimple Kapadia in pivotal roles.

Ranbir Kapoor and Vaani Kapoor's Shamshera is gearing up for an 18 March 2022 theatrical release. It also stars Sanjay Dutt as an antagonist. The YRF film based is said to take you back in time in the 1800 era.

Ranbir Kapoor and Shraddha Kapoor will next be seen in Luv Ranjan's next. The duo begin filming in early July this year and reports suggest that they even filmed few songs in Europe. No release date of the film is confirmed yet.

Ranbir Kapoor to star alongside Parineeti Chopra in Sandeep Reddy Vang directorial Animal. The film is set to hit theatres in Dusshera in 2022. The film also stars Bobby Deol and Anil Kapoor in major roles and is backed by Bhushan Kumar and Krishan Kumar under the T-Series banner. The movie was earlier titled Devil.

As the handsome hunk turns 39 today, we wish the Bollywood star good health and great films in the coming years. Happy Birthday Ranbir!

(The above story first appeared on LatestLY on Sep 28, 2021 10:41 AM IST. For more news and updates on politics, world, sports, entertainment and lifestyle, log on to our website latestly.com).