Apart from Pooja and Jac, the film also has Varun Sharma on board. 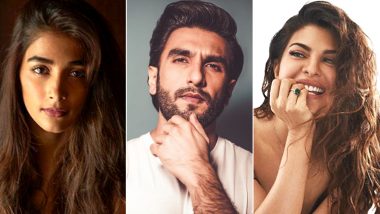 Family entertainers are the IT thing in Bollywood currently! Some managed to capture the attention of the fans while some were at the receiving end of criticism. Now, another entertainer that Bollywood is set to give to its audience is a situational comedy movie. Reports are that Rohit Shetty is directing this flick with Ranveer Singh in the lead. The latest development is that Pooja Hegde and Jacqueline Fernandez are the latest additions! The film is titled as Cirkus. Ranveer Singh's 83 To Release In Cinema Halls During Christmas 2020!.

A source close to the development told Pinkvilla, "The film that is a situational comedy will be starkly different from Ranveer's Simmba avatar and it's also a quick film which will be shot over six-seven weeks."

Apart from Pooja and Jac, the film also has Varun Sharma on board. The trio has apparently already given a green signal to the project. All the stars have signed the dotted line and will be starting their shoot for the film soon. Ranveer also has films like 83, Jayeshbhai Jordaar and a cameo in Akshay Kumar-Katrina Kaif starrer Sooryavanshi.

(The above story first appeared on LatestLY on Oct 19, 2020 09:37 AM IST. For more news and updates on politics, world, sports, entertainment and lifestyle, log on to our website latestly.com).