Based on the secret double lives of some of India's real-life spies, RAW is directed by Robbie Grewal. 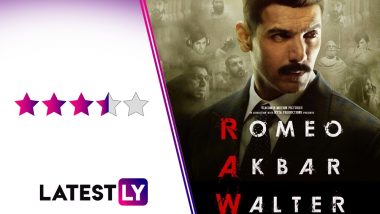 A spy thriller without unnecessary frills and thrills! That's a way of describing John Abraham's RAW aka Romeo Akbar Walter. Based on the secret double lives of some of India's real-life spies, RAW is directed by Robbie Grewal. While we love the showy nature of a James Bond every now and then, it is movies like RAW, last year's Raazi and even the underrated D-Day that make us realise that being a spy is a thankless job. John Abraham Starrer Romeo Akbar Walter Gets a Green Signal From CBFC, Two Verbal Cuts Ordered.

Coming back to the film, like Raazi, Romeo Akbar Walter begins before the onset of the 1971 Indo-Pak War. Srikant Rai (Jackie Shroff), the director of Research & Analysis Wing aka RAW, plucks banker Rehmat Ali aka Romeo (John Abraham) out of obscurity and trains him to be a spy. His qualifications? Romeo is an expert in disguises and is the son of a martyred army officer. Leaving his mother and girlfriend (Mouni Roy) behind, Romeo is sent to Pakistan as Akbar Malik where he is tasked to infiltrate into the close circle of Isaaq Afridi (Anil George), a dealer who supplied arms to the Pakistani army. Needless to say, it is no child's task as Akbar sees a crisis of trust, duty and his own identity with his cover often getting dangerously close to being blown off.

Unlike his more commercial fare of recent times like Parmanu and Satyameva Jayate, John Abraham and his director Robbie Grewal surprisingly keeps RAW a low-key, understated affair that underwhelms us at the start. The first half especially feels sluggish with a rather shaky start and slow pace. The scenes where Akbar gets into the good books of Afridi and him meeting a master spy called 'Joker' are interesting and a few of the dialogues are effective. Like when Afridi asks about 'Akbar's properties in Hindustan, and the latter corrects him by saying 'Kashmir'. Impactful without taking a dramatic turn! There are some thrills too in these portions, but nothing that makes your heart pause. In short, while the first half has its moments, it lacks the chutzpah to win you over completely.

It is when the second half begins when the effectiveness of playing it understated works wonders on you as a viewer. The twist near the interval will jolt you, but it is with the introduction of ISI chief Khudabaksh (Sikandar Kher) that things look upward when it comes to RAW. Khudabaksh proves to be a cunning nemesis to Romeo's straight-faced protagonist, without getting into a scenery-chewing mode. The narrative picks up pace, as Romeo finds himself caught in the suspicions of ISI, gets tortured and then is trapped in the political plays of the Pakistani army. All these events are interspersed with the planning of an enemy attack in Bangladesh.

The final act is where Romeo Akbar Walter finds its victory with some surprising turn of events that I do not wish to spoil here. Although someone who knows his or her history might take some guesses as to how things would unravel. The scenes between Romeo and Srikant, with Afridi, and then with his helper friend Salim (Raghubir Yadav) are quite nicely done, without getting too melodramatic. Like the scene where Romeo questions himself for being treacherous to Afridi, his friend, a Pakistani, reminds him of who he really is. Mouni Roy Looks Ethereal in Traditional Outfit as She Gears Up for Romeo Akbar Walter Promotions &#8211; View Pics.

It is not that the second half is without its flaws. Romeo's reconnecting with his girlfriend at an unexpected juncture, leading to some romantic developments, feels forced, even though Mouni's character stays important to the plot. Also, the portions before the final act continue to suffer from pacing issues. But I admit, the way the narrative is played out in the second half overcomes most of the flaws.

I also admire how Grewal and Abraham don't resort to needless jingoism and Pakistan-bashing, even when such things work in Bollywood movies these days. They actually depended on the flow of the narrative to make you soak in the emotions without spelling it out for you and, at least for me, the idea worked. Which is why, towards the end, I actually felt a surge of patriotism rushing into me when a character salutes the national flag, something that hasn't happened in a long time. Yes, despite the barrage of nationalist films that has reigned over cinema these days.

So what makes this scene in RAW so special? Because, you empathised with what came before! That's effective nationalism for me!

Why, the makers don't even resort to utilising John Abraham's action persona. At best, we get a thrilling chase scene between Romeo and Khudabaksh on foot (though I am not quite happy with how it ends in such an unbelievable manner).

The only time I felt the makers resorted to gain our sympathy was adding a song about mother's love after a crucial scene. However, when the dust settles down in the epilogue is when I realised the need of the song placement there and why it made sense.

The background score (Hanif Shaikh) is quite effective while the cinematography by Tapan Tushar Basu manages to lend yesteryear feel to the film. The songs feel unnecessary, but the "Vande Mataram" track sung by Sonu Nigam is lovely.

Watch The Trailer of RAW here:

You know you have cast the right actor when even the flaws of his style work in the favour of the character. Such is the case with John Abraham in RAW. You must have heard about how the movie was first offered to Sushant Singh Rajput, before he dropped out of the film and it landed on John's lap. No one can predict how the film would have turned out, had RAW stuck with its original lead actor. But John Abraham's poker-faced demeanour actually works in the favour of both his character and the movie.

Sure, he still struggles in the emotional scenes, but John is highly impactful in the sequences where he resorts to spy games. It may not be as effective as his performance in Madras Cafe (which for me, is his career-best performance), but John makes you feel for his character, and that's what RAW meant for you to do!

The character of the beautiful Mouni Roy is one of the surprise factors of the film. However, the character, itself, has very little scope to shine. Roy's performance is adequate, but when can we see her in a role on the big screen that challenges the actress in her?

After a long time, I have seen Jackie Shroff in a commanding role. It is a return to form for the actor whose recent performances felt like he is sleepwalking in those roles. As the intelligent RAW head, Jackie is dynamic and is as important a lead of the film as John Abraham.

Sikandar Kher is terrific as the ISI Chief, nailing the accent and the mannerisms so right. Raghubir Yadav wins your heart as Romeo's aide with a sad tale of his own. Suchitra Krishnamoorthy, Anil George, Rajesh Shringarpure, Alka Amin and Shadaab Amjad Khan give good performances that offer us nothing much to complain.

- The Sluggish Pace, Especially in the First Half

- Not For Those Seeking Commercial Thrills

In the movie, Srikant says that for a magic trick to work well, people should focus on one hand, leaving the other hand to do its trick. John Abraham and Robbie Grewal pull off a similar trick with RAW aka Romeo Akbar Walter. The highly engaging spy drama that almost deceives you by underplaying itself, only to deliver bucketloads of effective thrills and surprises towards the finale. Recommended!

(The above story first appeared on LatestLY on Apr 04, 2019 01:55 AM IST. For more news and updates on politics, world, sports, entertainment and lifestyle, log on to our website latestly.com).