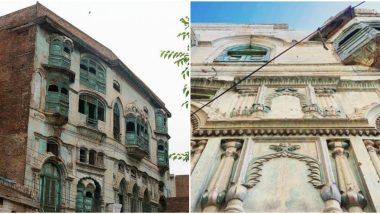 Late actor Rishi Kapoor's ancestral home in Peshawar, Pakistan named as 'Kapoor Haveli' is reportedly facing demolition threats. The haveli is set in Qissa Khwani Bazar in Peshawar in Khyber Pakhtunkhwa province. However, the owner of the house is now demanding it to be demolished and turn it into a commercial complex site. After the late actor's request, the Pakistan government decided to convert the old mansion into a museum in 2018. However, the current owner is now threatening to demolish it. Neetu Kapoor Shares An Old Picture With Rishi Kapoor, Says 'Value Your Loved Ones As That's Your Biggest Wealth'.

As per a report in HT, Foreign Minister Shah Mahmood Qureshi had agreed to Rishi Kapoor's request of turning it into museum. However, some of them complained that it has turned into a 'ghost' building, while other said that it was on the verge of collapse in case of any natural disaster.

The owner Haji Muhammad Israr, a wealthy jeweller in the city said that he just wanted to demolish the property for commercial reasons. He was quoted saying, "I have sufficient money to cater to my needs. I supply around 3 to 4 maund (120kg-160kg) gold a week to the Peshawar biggest jewellery market." He had also reportedly attempted to bulldoze the mansion but met with multiple FIRs against him at Khyber Pakhtunkhwa heritage department.

Speaking about the history of Haveli, it was built by filmmaker Prithviraj Kapoor's father, Basheswarnath Kapoor. Prithviraj and later, legendary filmmaker-actor, Raj Kapoor were born in this haveli. Later in the 90s, Rishi Kapoor along with his brother Randhir visited their old mansion.

(The above story first appeared on LatestLY on Jul 13, 2020 08:57 AM IST. For more news and updates on politics, world, sports, entertainment and lifestyle, log on to our website latestly.com).