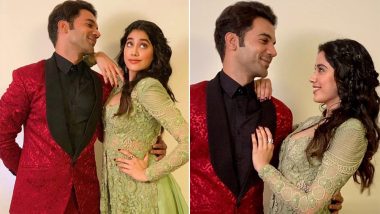 After bagging films like Dhadak, Takht and Gunjan Saxena Biopic, Janhvi Kapoor will now be seen in the film named Roohi Afza. The actress will be seen romancing the current go-to actor of the industry, Rajkummar Rao. The horror-comedy drama directed by Hardik Mehta went on floors on Friday and the star shared the glimpse of it from the sets. The young Bollywood diva shared the picture of the clapboard on Instagram and wrote, "Karne aa rahe hai attention ko kabza, aaj se shuru hoti hai #RoohiAfza!" So, what is this film about? Here's what we know so far. Rajkummar Rao and Patralekha Recreate the Iconic DDLJ Climax in London and We are Loving This New Raj-Simran Jodi - Watch Video.

Janhvi will reportedly be seen in double role and the title is based on these two characters- Roohi and Afsana. She will be seen switching her roles which are totally contrast to each other, scene by scene.

Earlier, speaking with IANS, co-producer Mrighdeep Singh Lamba said, "We took some time to finalise the female lead. Besides being pretty, she needed to oscillate between two characters which are poles apart. You will fall in love with her in one scene and won't believe she is the same girl in the next one. It's not an easy switch for an actor. It's the perfect casting."

Speaking of Rajkummar Rao, we already saw his stellar performance in another horror comedy film, Stree. This will be his second experiment in the same genre. The makers were toying between Varun Dhawan and him for the role as they hold a good command over the comedy timing. However, it is Rajkummar who is finally chosen for this entertaining drama, also bankrolled by Dinesh Vijan. The duo had announced the film long back with their adorable pictures. The fans loved this fresh pairing too. The first schedule of the film will take place in Uttar Pradesh and the film will hit the screens on March 20, 2020.

(The above story first appeared on LatestLY on Jun 14, 2019 03:45 PM IST. For more news and updates on politics, world, sports, entertainment and lifestyle, log on to our website latestly.com).