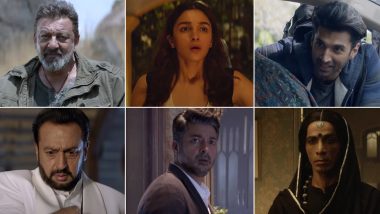 Sadak 2 is special for Alia Bhatt for many reasons. Firstly, she's working on a sequel of this hit 1991 release that also starred her sister, Pooja Bhatt along with Sanjay Dutt. Secondly, this is her first project under her home banner and also her first with her director father, Mahesh Bhatt. After announcing its OTT premiere on Disney+ Hotstar, the makers finally unveiled its first trailer and you can expect a heartwarming tale ahead. Sadak 2 will mark Dutt's return and his journey with Bhatt and Kapur along. Sadak 2 Will Go For a Straight to OTT Release; 'This is the Only Option Left', Says Producer Mukesh Bhatt.

Sadak revolved around Pooja Bhatt, who played a sex worker working for the brothel owner, Maharani. She then falls in love with a taxi driver and they decide to elope together. However, Maharani then orders her henchmen to kill them. While the sequel isn't obviously on the same lines, it focusses on Godmen in our country. Alia's character is out on a mission to expose a fake guru who runs an ashram and Sanjay joins her in the same later on. Sadak 2: 'Tumhe Apna Banane Ki Kasam' From Sadak to be Remade for The Alia Bhatt-Aditya Roy Kapur Starrer.

Check Out Sadak 2 Trailer Below:

Sadak 2 will release on Disney+ Hotstar on August 28, 2020. The film was earlier scheduled to release in theatres in October this year, however, the ongoing pandemic compelled makers to think of a different way out. With theatres and multiplexes still being shut in the country, it was a wise decision to have an early OTT release instead.

Sadak 2 was among the many releases that were announced by Disney's digital platform. The list also included names like Laxmmi Bomb, Bhuj: The Pride of India, Khuda Haafiz, Lootcase and Dil Bechara. Stay tuned!

(The above story first appeared on LatestLY on Aug 12, 2020 10:25 AM IST. For more news and updates on politics, world, sports, entertainment and lifestyle, log on to our website latestly.com).