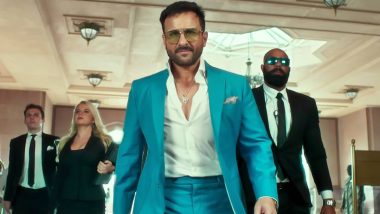 Actor Saif Ali Khan says that clean family entertainers have become a rarity and is thrilled that he can take his entire family to the theatre to watch his next Bunty Aur Babli 2. Saif said: "I will definitely take my entire family to watch Bunty Aur Babli 2. Clean family entertainers have become a rarity in our industry today and this film belongs to that quintessential Hindi comedy genre that you can take your full family to have a good time." Bunty Aur Babli 2 Song Luv Ju: Siddhant Chaturvedi And Sharvari’s Romantic Track To Be Out On November 1!

He added: "It's rooted in the Indian film language yet extremely modern and cool for today's youth and family. In fact, this movie is made for every age group and you can even take your kids to watch this movie!" The 51-year-old star, who is gearing up watch the film with his children and actress wife Kareena Kapoor Khan, is really happy that he did a film that "can invite families back to the theatres and try and make them smile after 2 years. 'Bunty Aur Babli 2' is a film that has something for every age group and that's what makes it special." Bunty Aur Babli 2: Saif Ali Khan Opens Up About His Role of a Railway Ticket Collector in the Movie.

Saif believes that people are looking for a reason to smile again. He said: "In today's environment when people are coming out of the pandemic, they want to see entertainers that they can watch with their families because every family across the world was in a lockdown. People haven't celebrated with each other and they are wanting to now. So, I hope our film entertains the whole country and leaves people in splits!" Yash Raj Films' 'Bunty Aur Babli 2', which releases on November 19, also stars Siddhant Chaturvedi and debutante Sharvari. It has been directed by Varun V. Sharma.

(The above story first appeared on LatestLY on Nov 16, 2021 03:20 PM IST. For more news and updates on politics, world, sports, entertainment and lifestyle, log on to our website latestly.com).