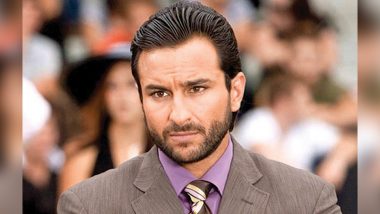 Sushant Singh Rajput's untimely demise has created noise on Twitter and the nepotism debate has once again gained momentum. The actor died by suicide on June 14, 2020, at the age of 34 and left everyone in a state of shock. Since then, numerous celebs from Bollywood have come forward and talked about the 'camp-culture' and their struggles in the industry. Even netizens slammed Karan Johar for being the 'flagbearer of nepotism'. Amid all this, recently, Saif Ali Khan in his interview with The New Indian Express revealed how he also was a victim of nepotism once. “There is inequality in India that needs to be explored. Nepotism, favouritism and camps are different subjects. Even I have been a victim of nepotism, but nobody speaks of that,” he said. Saif Ali Khan Defends Karan Johar in the Recent Nepotism Debate, Says 'The Truth is Always Complicated'.

Saif's this statement has not gone down well with the Twitterverse and the actor has been massively trolled online. Netizens gave a reality check to the Jawaani Jaaneman actor and reminded him how belongs from an elite gharana and is a son of veteran actress Sharmila Tagore and former Indian cricket captain Mansoor Ali Khan Pataudi. Check out the tweets below: Have Akshay Kumar and Rohit Shetty Dropped Karan Johar From His Producer's Role on Sooryavanshi? Here's the Truth!

Saif Ali Khan says he's a victim of nepotism. Like when he won a National Award for Hum-Tum. Because it was due to nepotism of his mother Sharmila Tagore who was holding a prominent position in National Awards jury.

Saif ali khan says he has been victim of nepotism pic.twitter.com/tToUIgIOh0

With A Karan Johar Twist!

Karan johar after seeing the news of Saif Ali Khan being victim of nepotism 🥴#Saifalikhan pic.twitter.com/DiFsyKcf8b

Saif Ali Khan's mother Sharmila Tagore was a big actress and his father Mansoor Pataudi was one of the richest persons back then and still he says that he had been victim of Nepotism.#SaifAliKhan be like : pic.twitter.com/UNbvf8RWz6

#SaifAliKhan says "he is a victim of nepotism."

When he won a National Award for Hum-Tum, it was due to nepotism of his mother #SharmilaTagore who was holding a prominent position in National Awards Jury.

So not only *SaifAliKhan* but also #Taimur has been a victim of #Nepotism!! pic.twitter.com/126BzSrbEs

For the unversed, Saif Ali Khan plays a cameo in Sushant Singh Rajput's last film Dil Bechara. The film stars debutante Sanjana Sanghi as the female lead and is said to premiere on Disney+Hotstar on July 24. Coming back to Saif's take on nepotism, what's your thought on the same? Tell us in the comment section below. Stay tuned!

(The above story first appeared on LatestLY on Jul 02, 2020 01:12 PM IST. For more news and updates on politics, world, sports, entertainment and lifestyle, log on to our website latestly.com).