Saif in his recent interaction spoke about the ongoing nepotism debate in the industry and defended Karan Johar by saying he's receiving a lot of flak for being a very large symbol. 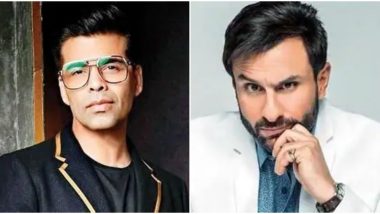 Saif Ali Khan is realistic and honestly very practical in his approach. The actor knows how the industry works and despite being a star kid, he insists he too is a victim of nepotism but nobody is interested in talking about that. He believes there are different levels of nepotism and that's one struggle that will keep be ongoing. When it comes to the recent debate of Karan Johar v/s Sushant Singh Rajput where the former was grilled online for being a 'movie mafia' and tagged as someone who doesn't work with the outsiders, Saif assumes he's attracting a lot of flak for wearing too many hats. Have Akshay Kumar and Rohit Shetty Dropped Karan Johar From His Producer's Role on Sooryavanshi? Here's the Truth!

In his recent conversation with The New Indian Express, when the star was asked about his take on Karan Johar and the ongoing nepotism debate, he said, "I think somehow Karan Johar has made himself a very large symbol. Since he has put on so many different hats and he's been to so many different places. It seems like he's attracting a lot of flak for that. I am sure it's not all deserved. The truth is always complicated. Unfortunately, people are always interested in symbols. not truth. I hope that tide's over and I hope better things come his way."

Regarding his views on nepotism, Saif said, "Ugliest thing about nepotism is someone who is so talented is replaced with less talented ones." He further added how Sushant's name shouldn't be dragged into this mess as the struggle will never end. "Nepotism exists. I think that's a struggle that will be ongoing. I really think that it's not okay to give people from certain background chances over people who are talented." Box Office: Karan Johar's Sooryavanshi and Brahmastra To Be Affected By Backlash Over Sushant Singh Rajput's Demise?

Meanwhile, Karan Johar has completely disappeared from the social media scenario and reports suggest he's upset with his fraternity for not standing by him during this debate. Apparently, he has also tendered his resignation from the MAMI board and has lessened the number of "following" people on his Twitter handle.

(The above story first appeared on LatestLY on Jul 02, 2020 08:37 AM IST. For more news and updates on politics, world, sports, entertainment and lifestyle, log on to our website latestly.com).