Salman Khan Birthday: Five Times The Actor Didn't Get The Girl And We Hated It

On Salman Khan's birthday, let's talk about those movies which did disservice to the romantic Salman by not making the girl fall for him. We have five such movies and we hated them to some extent when he didn't get the girl. 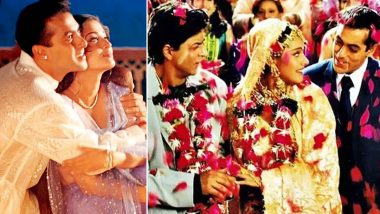 Salman Khan today is Bhai, an action man. But for people from the 90s, he was the ultimate hero. Good-looking, sweet-smiling, macho, with twinkling eyes, Salman was the dream-man. It won't be wrong to say he was the most conventional Hindi film hero of that decade. Many of his fans are ones who have seen him evolve from a rowdy brat in Biwi Ho To Aisi to the superstar that he is today. Salman Khan in a romantic film used to do things to our heart and so, every time, he used to lose a girl, we would cry. On his birthday, let's talk about those movies who did disservice to the romantic Salman by not making the girl fall for him. Salman Khan Announces Bajrangi Bhaijaan’s Sequel in Presence of SS Rajamouli, Alia Bhatt and Others at RRR Pre-Release Event.

P.S. We totally believe that it is a woman's right to choose whoever she wants and nobody can decide it for her. We are just making an observation here.

A disclaimer in case some woke kinds feel we are disrespecting the woman's choice!

This goes without saying Anjali should have married Aman, no questions asked. He was always there for her and even waited for her till she was in the right frame of mind to marry. We will be Team Aman always and forever. Also we feel, Salman's entry scene is the best in the entire Hindi cinema universe! Salman Khan Birthday: 5 Awesome Shirtless Fight Sequences of the Actor That Will Make You Say 'Koi Toh Rok Lo'.

Yes, Nandini's choice is debatable. On one side, there's Vanraj who is cool, calm, collected and loves her unconditionally. On the other, there's Sameer she fell for who makes her laugh. While we don't mind Nandini choosing Vanraj, she would have been happier with Sameer. The latter sacrificed a lot to let her be happy and at the end, he deserved happiness too! When Salman breaks down at the end, we had moist eyes too...we still do!

This is heartbreaking. It wasn't even a love triangle and yet Radhe couldn't unite with his Nirjara. We agree it was borderline stockholm syndrome and we aren't even justifying it especially because the movie gave no reasoning behind why Nirjara fell for him. But at the end, when he gives up on life after he sees her dead body is engraved in our head. We doubt we have ever cried so much in a Salman Khan film, not after watching his worst ones either.

Saajan was definitely unfair to Madhuri Dixit's character who is being flung from one man to another without consent. But if you ask us, we would still want her to go with Salman as he was fun and also kind.

Interestingly, Salman Khan loses the girl to Sanjay Kapoor here. Priya Gill declines his proposal to search for a man she only knows through letters. We agree she wouldn't have settled for him when her heart lies elsewhere but Salman seemed like a rational option over the wild goose chase she was on. But cinema wants drama!

There's also Majdhaar where Salman marries Manisha who is in love with Rahul Roy. We will let that sink in!

(The above story first appeared on LatestLY on Dec 27, 2021 12:00 AM IST. For more news and updates on politics, world, sports, entertainment and lifestyle, log on to our website latestly.com).