Salman Khan's Radhe has been a complete downer. It may have managed to crash ZEE5 and ZeePlex platforms where it released, the film has failed to get users' thumbs up. IMDb ratings of the film are at a dismal 2.1 which is only slightly better than Race 3, Salman Khan lowest rated film ever on the site. 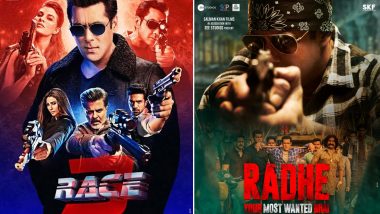 Salman Khan's Radhe released on OTT yesterday and since then, reviews have been pouring in. Nobody expects a Salman Khan movie to be an Oscar winner anyway, not even his fans. But many wanted it to be interesting enough to give a few hours of solace from the terrible times we are going through. Turns out that was too much of an ask. The film just couldn't get over Salman's stardom and become anything beyond his regular humdrum. Although the actor had already started celebrating its success on Twitter, IMDb tells a different story. The film has managed to earn a paltry 2.1 user ratings. It is only second to 2018's Race 3 which scored a disappointing 1.9 user ratings. Radhe Movie Review: Salman Khan and Disha Patani’s Tone-Deaf Remake of The Outlaws Is Terribly Dated! (LatestLY Exclusive)

Reviews of Radhe have been brutal. Despite being a remake of a Korean film The Outlaws, Prabhudheva failed to incorporate the best bits of the original in this tepid remake. Many have even called it the worst remake Salman has ever been part of.  Radhe Review: Salman Khan and Disha Patani’s Massy Entertainer Gets the Worst Ever Critiques 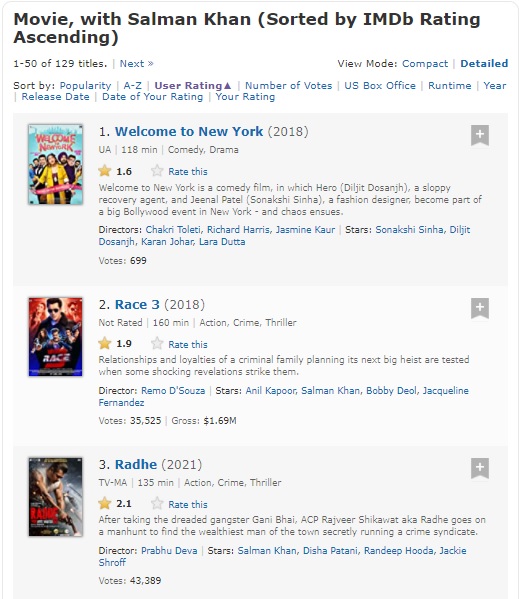 It's quite saddening to see Salman Khan wasting away his stardom on such terrible features. He is either not taking his fans seriously or just doesn't think they deserve better than this. We know he deserves a far better movie than Radhe. Hope he understands that someday.

(The above story first appeared on LatestLY on May 15, 2021 12:09 PM IST. For more news and updates on politics, world, sports, entertainment and lifestyle, log on to our website latestly.com).